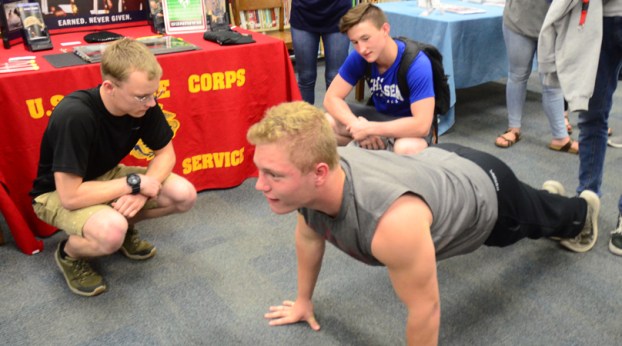 A student does push-ups for a military recruiter at the CHHS career fair. (Reporter photo/Amalia Kortright)

CHELSEA- Chelsea High School held its seventh annual career fair on Friday, March 24 at 12:30 p.m. in the school’s media center. According to CHHS teacher Cynthia Walker, this year’s career fair has incorporated as many volunteers from local businesses and nonprofit organizations as possible.

“I saw the need for students to see what’s available in the Birmingham area,” Walker said. “We want to educate them on the amount of education, disadvantages, advantages and salaries of different careers.”

CHHS Principal Wayne Trucks said the career fair placed a special emphasis on the job market in Chelsea in the hopes of seeing students contribute to the city’s economy in the future.

“With our career fair, we’re trying to bring in our local businesses a little more so students can learn about job opportunities in Chelsea,” Trucks said. “Chelsea is lot like other schools, in that some students will move away, but most will find their way back.”

Sophomore Kadin Christian said while he already has an idea of what he plans to pursue in the future, the career fair gave him more insight on what different jobs required.

“I’m learning a lot about different career fields and what they’re like. I already have an idea of what I want to do, but it’s interesting to see what people have to do everyday at their jobs,” Christian said.

Christian said he plans to become a minister after he graduates from high school, and hopes he can stay in Alabama.

Becky Landers said she was glad to talk to students about what her job as the Chelsea City Clerk is like.

“I felt honored that they invited me. I love Chelsea, and I love what I do,” Landers said.

According to Landers, the career fair is important because it is one of the ways CHHS is helping students prepare for the future.

“I will retire one day. Hopefully, one of these students will take my place,” Landers said.

Walker said the goal of the career fair is to make students consider career prospects that they had never thought of before.

“A lot of people think they’re going to be a nurse, a lawyer or a doctor,” Walker said. “I want them to see other careers and learn about how there are other options.”