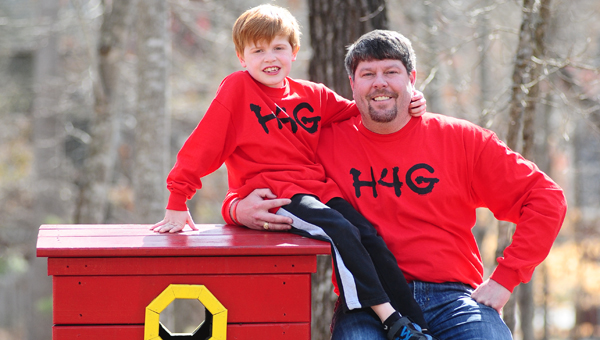 Gabe and Scott Griffin try to educate others about his condition.

Scott Griffin, President of the Birmingham-based Hope for Gabe Foundation, announced plans to share the story of Alabama’s Rare Disease Advisory Council legislation from coast to coast over the next six months.

The non-profit foundation will also educate the public and policymakers about access to drugs through its third cross-country bicycle race.

“The Alabama Legislature passed a Rare Disease Advisory Council in Alabama [on March 20],” Griffin said. “The Hope for Gabe Foundation will take Alabama’s story of collaborative success from coast to coast.”

The non-profit has twice organized cross-country bicycle rides, called Ride4Gabe, to raise awareness about Duchenne Muscular Dystrophy and educate the public about legislation that can help save lives.

Griffin’s son, Gabe, is 11 years old and suffers from the terminal disease Duchenne, and Griffin desperately hopes for a cure for his son someday soon.

Dr. Brian Toone, a Samford University professor who lives in Hoover, is an internationally known competitive cyclist who will participate in the annual endurance cycling race called Race Across America, or R.A.A.M.

Toone has become close with the Griffins over several years and participated in the foundation’s annual Ride4Gabe efforts. This year’s bicycle race will take the team from Oceanside, California to Annapolis, Maryland and cover about 3,080 miles.

Toone’s effort will be promoted as RAAM and will use the slogan “Racing for Accelerated Access to Medicine.”

Access is a significant issue in the Duchenne community, and Griffin said he believes policymakers can learn from the story and apply those lessons to future legislation at the state and federal levels.

“In the last year we’ve seen the first-ever drug approved that targets the underlying cause of Duchenne,” Griffin said. “It is infuriating that insurance companies are refusing to cover it even though it is safe and the leading American doctors who treat Duchenne say it should be approved.

“On the other hand, we think it is ridiculous the FDA is allowing another company to charge $90,000 to our insurance companies for a different drug that was recently approved by the FDA since we have been getting that same drug from Europe for Gabe at a cost of $500 a year since 2010.”

Toone said that while winning the Race Across America is obviously on his mind, he is most inspired by his ability to demonstrate rigors and fatigue that kids with Duchenne and other rare diseases feel each and every day.

“I’ll be cycling around the clock for about 10 days as I cross the country from coast to coast,” Toone said. “When I am too tired to get myself on or off my bicycle, I will thank God for my good health and look to rare disease patients like Gabe, who cannot pedal for themselves, to inspire me along the way.”