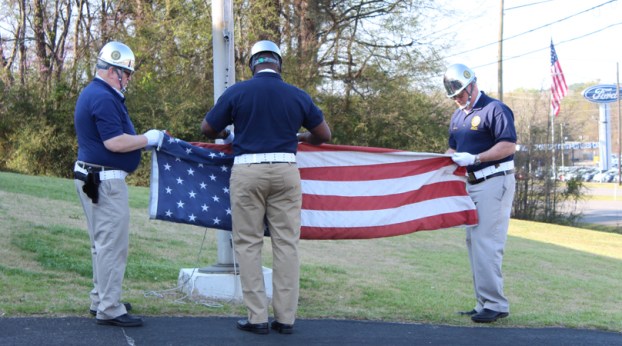 A brand new flag is raised in front of Specification Rubber Products as part of a flag replacement ceremony. (Contributed)

ALABASTER- American Legion Matthew Blount Post 555 held a flag replacement ceremony at Specification Rubber Products, Inc in Alabaster at 9 a.m. on Thursday, March 23. According to First Vice Commander Tom McDaniel, a flag replacement team retired the worn-out flag that was originally flying in front of the company’s building and put a brand new one in its place.

“We were originally contacted by the business, but Kenneth Paschal [a Post 555 member] went by there, saw their flag and stopped by to inform them of the services we provide,” McDaniel said.

McDaniel said the flag retirement ceremonies performed by Post 555 are identical to those performed in the military. The Post 555 flag replacement team is comprised of four people and a moderator, who explains to onlookers what each part of the ceremony means.

“People get to see an actual service performed,” McDaniel said.

During this particular flag replacement ceremony, McDaniel said about 25 to 30 people came outside to watch.

“We always have people stop by to watch us. Everybody is always receptive to it,” McDaniel said.

McDaniel said Post 555 regularly does flag replacement ceremonies to remind the public of the importance of the American flag and the etiquette surrounding it.

“It’s about honoring our flag and what it stands for to the public,” McDaniel said.

According to McDaniel, Post 555 will replace flags at schools, private businesses and municipalities, and ceremonies are done at no cost.

“Our ceremonies last about 15 minutes. The only thing we ask them to do is purchase the flag from the American Legion Flags website,” McDaniel said. “The flag is inexpensive, and can be shipped quickly.”

Flags are available for purchase at Americanlegionflags.com. To request the flag detail to replace a flag at a specific location or learn more about American Legion Matthew Blount Post 555, visit Alpost555.com.