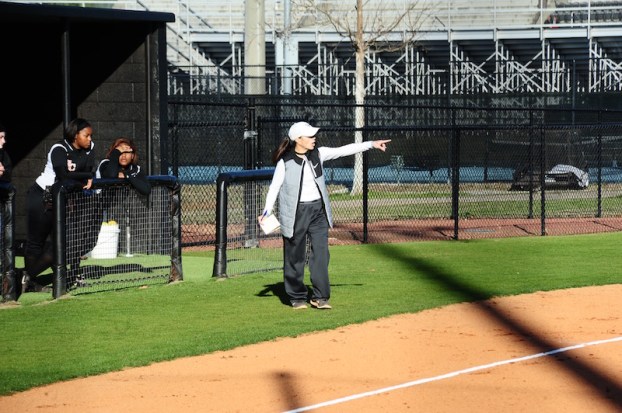 Spain Park head coach CJ Hawkins has helped lead her team to a 26-1 start to the 2017 softball season as they look to capture the Gulf Coast Classic this week. (Reporter photo/Alec Etheredge)

Gulf Shores – After losing their first game of the season to Hewitt-Trussville in their last outing on March 21, the No. 1 Spain Park Jaguars have rebounded nicely during the first few days of spring break with four consecutive wins.

The Jags won 22 consecutive games to start their 2017 campaign making them one of the hottest teams not only in the state, but the country as they received a ton of national attention, including a No. 3 ranking nationally according to MaxPreps. The 14-7 loss to the Huskies ended that win streak, but obviously didn’t hurt the Jaguars’ confidence heading into pool play of the Gulf Coast Classic in Gulf Shores.

Already, in the first two days of the tournament on March 27 and 28, Spain Park has picked up four more wins in a row to start a new win streak. In their first three games with Haleyville, Hayden and Vernon Hills, the Jags outscored their opponents 24-0 only giving up two hits in each of the three outings.

In their fourth game of the tournament they came from behind to take down Dale County 8-5.

The Jags exploded for nine hits, including two triples, and 10 runs in the top of the first to put game one of the tournament out of reach before Haleyville even came to the plate. Spain Park picked up 15 hits in the game to Haleyville’s two as they ran away with over the final few innings.

Maddie Majors, Mary Katherine Tedder and Annabelle Widra all had three-hit games. Tedder’s performance may have outshined the rest, however, as she ended the game with three triples and five RBIs. Kate Campbell pitched all five innings in the circle allowing just two hits and three walks, while striking out five.

The runs weren’t as plentiful in game two, but Widra’s dominance in the circle made up for it as she went six scoreless innings giving up just two hits while striking out three. She also had a nice game at the plate going 1-3 with a game-high two RBIs. Jenna Olszewski drove in the third run after going a solid 2-3 at the plate.

Spain Park outhit Hayden 8-2 and allowed no free base runners to walks or errors, while Hayden picked up two errors.

In game three, not only did the Jags’ pitching continue to impress, but they took advantage of eight errors by Vernon Hills to put up nine runs on six hits.

Seven of those runs came in the first, followed by two more in the third thanks to six hits and five errors between the two innings. Julianna Cross was the only Spain Park player with multiple hits after going 2-2 at the plate. Caroline Parker, Mary Kate Teague and Tedder all had two RBIs during the contest.

Caroline Kendrick pitched another gem for the Jags in the circle going four innings and allowing just two hits yet again, while striking out two.

While the first three games were a little easier, game four was a little more thrilling. Spain Park took an early 3-0 lead in the top of the first but gave up five unanswered runs in the bottom of the first and second to fall behind 5-3.

They responded with a four-run outburst in the top of the fourth and added one more in the top of the fifth to complete the 8-5 come-from-behind win to finish pool play undefeated. Cross and Tedder both continued their impressive play by going 2-3 at the plate and driving in two runs apiece.

The four wins moved Spain Park to 26-1 on the season as they will head into the final day of the tournament as one of the favorites to win the 2017 Gulf Coast Classic.