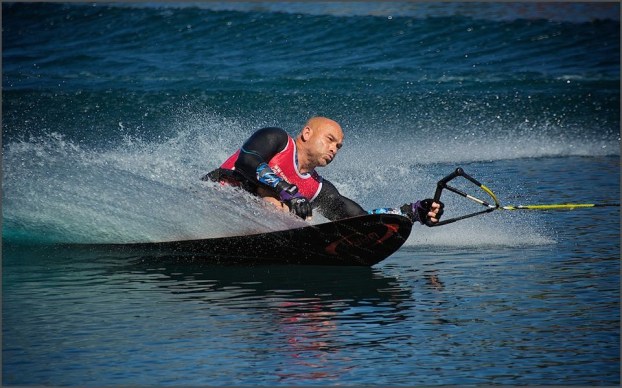 Disabled water skier Joe Ray is preparing to travel to Australia from April 15 to May 2 to participate in the 13th Disabled Water Ski World Championships for the ninth time. (Contributed)

WILSONVILLE – At 59 years old, Wilsonville resident Joe Ray is preparing to travel to Australia from April 15 to May 2 to participate in the 13th Disabled Water Ski World Championships for the ninth time.

The U.S. team will be vying for an unprecedented fifth consecutive World Championship. The USA is the only country to have ever won three championships in a row.

Ray is a three-event skier who competes in the seated division in slalom, jump, and tricks skiing. Ray has been on the U.S. team since 1999 and has amassed 13 gold World Championship medals, set seven world records, is a 10-time national champion and was honored as USA Water Ski’s Male Disabled Water Ski Athlete of the Year six times.

“I love the sport,” said Ray, who suffered a spinal cord injury in an auto accident at 20 years old. “It’s just what I do.”

Despite his love for the sport, Ray said he is retiring after the World Championships. After his retirement, he plans to continue teaching adults and children about adaptive sports through his work at Adaptive Aquatics.

“I’m going to keep the sport alive by teaching others,” he said.

Ray has been training 17-year-old Sarah Switzer since she was 6 years old, and now she will compete with him at the World Championships in Australia.

With the World Championship being held in April, skiers must practice throughout the winter to provide their best performance. Although the U.S. team has dominated adaptive water skiing since its inception, it remains a mostly unknown sport and is self-funded.

Athletes must pay for their own training camps, air travel, accommodations, uniforms and entry fees at a cost of nearly $5,000 per athlete.

Ray is seeking assistance through the team’s website USskiTEAM2017.com to help raise money for the trip to Australia. Donations via PayPal are accepted and the public is allowed to participate in drawings to help the skiers.