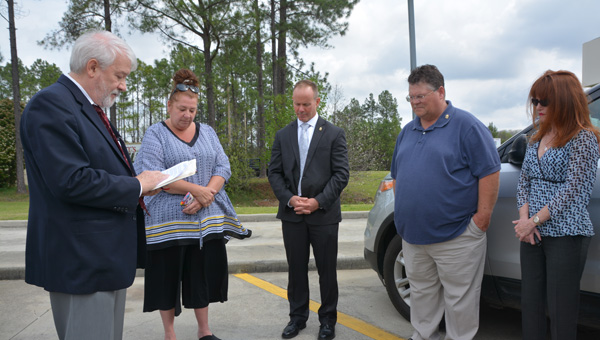 Attendees of a memorial for Special Agent George Douglas Althouse, a DEA agent who was killed in 1992, pray at the site of his murder, off U.S. 280 near Inverness. (REPORTER PHOTO/STEPHEN DAWKINS)

NORTH SHELBY – Dana Althouse-Yoder visited the scene of her brother’s murder for the first time as the 25th anniversary of the tragedy nears. 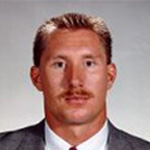 Althouse-Yoder, Drug Enforcement Administration agents and others held a memorial ceremony on March 27 for Special Agent George Douglas Althouse, who was killed on May 28, 1992, at the Chevron fuel station at 4685 U.S. 280, near Inverness.

Doug Althouse, 28, was shot and killed during an apparent robbery and carjack attempt at the station while working undercover as a DEA agent.

The suspect fled the state but was later captured, convicted of murder and sentenced to death.

Shannon Webster, senior pastor at First Presbyterian Church in Birmingham, led the ceremony after being contacted by Bill McIntyre, who organized the ceremony as a surprise for Dana Althouse-Yoder.

Webster read from Romans 8—“For I am convinced that neither death nor life, neither angels nor demons, neither the present nor the future, nor any powers, neither height nor depth, nor anything else in all creation, will be able to separate us from the love of God that is in Christ Jesus our Lord”—and prayed for those in dangerous professions.

Bret Hamilton, assistant special agent in charge for DEA, thanked those who organized the ceremony.

“Doug was never be forgotten,” Hamilton said. “He will always be remembered.”

McIntyre and Althouse-Yoder, who grew up with her brother in Lancaster, Pennsylvania and still lives there, were on their way back north after vacationing in Florida.

“I had no idea he was making all these phone calls,” Althouse-Yoder said about McIntyre setting up the ceremony.

Doug Althouse decided to enter a career in law enforcement while attending Middle Tennessee State University, his sister said, and worked for the Franklin County (Tennessee) Sheriff’s Office before being assigned as a DEA agent in Nashville then Birmingham.

“Doug was very much a go-getter,” Althouse-Yoder said. “He accomplished everything he set out to do.”

Among the accomplishments Doug Althouse was not able to fulfill was his dream of becoming a federal judge.

The Doug Althouse Memorial Foundation was established in his honor shortly after his death. The foundation provides scholarships to senior football players at Althouse’s high school, Conestoga Valley.

Althouse-Yoder said her brother’s memory remains apparent and said her daughter never knew her uncle but is much like him.

“We always just imagine Doug is still here,” she said. “We miss him dearly, but he is thought about every day and talked about quite often.”

From Staff Reports Scott Griffin, President of the Birmingham-based Hope for Gabe Foundation, announced plans to share the story of... read more