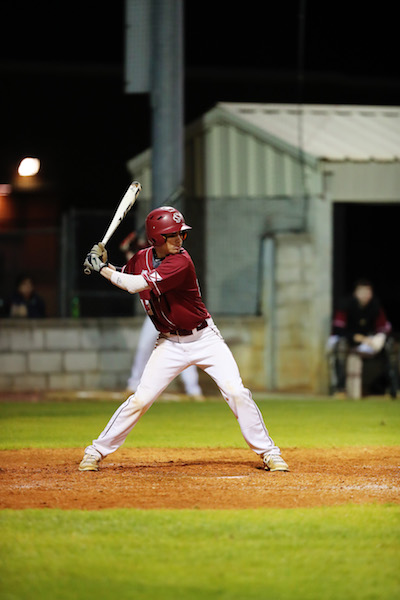 Shelby County picked up a big win over Montevallo on Wednesday, March 29. (For the Reporter/Cari Dean)

COLUMBIANA – After hitting a hot streak and winning four games in a row to get within one game of a .500 record, Shelby County’s baseball team lost its next two games to fall behind the eight ball again. That didn’t get this team down whatsoever as they rebounded with a 5-1 win over county foe Montevallo on Wednesday, March 29, to show why this team is so improved from a season ago.

The first inning and a half were scoreless as neither team really threatened until Shelby County came to the plate in the bottom of the second with bats made of fire.

The Wildcats started the inning with a strikeout, but followed that with five consecutive base runners. Joseph Pennington started the trend with a one-out infield single to the shortstop that he was able to leg out. Chase Jones walked in the next at bat after a nice seven-pitch at bat to put runners at first and second.

Kody Farmer followed with another ground ball to the shortstop that he was able to leg out for a second infield single of the inning to load the bases with one out for Wyatt Miskelly. Miskelly laid down a beautiful squeeze-play bunt on the first pitch he saw that not only allowed Pennington to score, but also allowed him to reach base to keep the bases loaded.

Greg Oliver was next up and had the most crucial hit of the inning as he drove the first pitch of the at bat past the left fielder for a bases-clearing triple to give the Wildcats a 4-0 lead at the end of two.

With the offensive firepower so early in the game, all they needed was a strong performance on the mound to hold the cushion that was given to them, and that’s just what they got from both Austin Harris and Chase Jones. Harris got the start going five innings and allowing just four hits and one earned run, while Chase Jones came in for relief to close out the final two innings.

Jones was able to get the final six outs with relative ease only giving up one hit in his time on the mound. Harris had a strong start not allowing a run over the first four innings, but three singles and the Bulldogs first run in the top of the fifth is what ended his night.

Shelby County came right back and answered the Bulldogs’ run with another of their own in the bottom of the fifth. Jordan Deaver drove a one-out double to center field, which allowed Adison Couch to bring him home one pitch later with a single to extend the Wildcats’ lead to the final score of 5-1.

Couch led Shelby County at the plate going 2-3 with an RBI, while Oliver’s triple was the most damaging giving him three RBIs on a 1-3 day. Six different Wildcat players had a hit in the game, while three picked up an RBI.