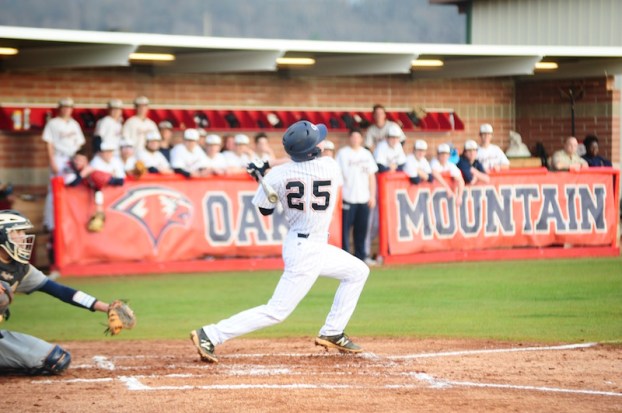 Oak Mountain skyrocketed up the 7A rankings from No. 10 to No. 4 after a strong week. (Reporter photo/Alec Etheredge)

To show how improved baseball is across Shelby County, last year combined between both the baseball and softball polls the county saw around five teams ranked between the two divisions. In the most recent rankings released by the ASWA, baseball beat that number by itself with a remarkable seven teams from the county in their respective top 10.

Last season, teams we have become accustomed to being successful struggled and didn’t make the runs we expected, while a handful still did, the bulk of success that this county is used to seeing is back where it belongs during the 2017 season.

In 7A we saw the biggest move of the week from the Oak Mountain Eagles, who jumped an incredible six spots from No. 10 to No. 4 thanks to a core of strong outings. The Eagles were 13-6 in last week’s rankings, but have gone 6-1 since then, including six straight since a loss to 5A No. 1 Briarwood, whom they beat two days earlier. They may be the hottest team in the county right now.

Also jumping into the 7A top 10 for the first time this season is the Spain Park Jaguars, a move that is long overdue. The Jags are currently 14-7 this season and have won six of their last eight games. Their only losses are to Pelham by one run and Helena, who is arguably one of the best teams in the state.

Speaking of Helena, the Huskies came in as the highest ranked 6A team in the county at No. 4. Helena is possibly the hottest team in the state right now having won 13 of their past 15 contests. If they keep up this strong play they will be No. 1 in no time. The Huskies have scored less than eight runs just twice in their last 10 games as the offense continues to shine and lead them to victory. They hold an overall record of 18-4 this season, which is the same is No. 1 Cullman.

Slide down three more spots in the 6A rankings and you’ll find another team that is clicking on all cylinders, the Chelsea Hornets. The Hornets sit in the same No. 7 spot they were in a week ago, but their record continues to get better and better. Sitting at 14-6 last week, they have since gone 4-1 winning four straight games at the Lake Martin Classic to move their record to 18-7 overall. Chelsea has now won six of their last seven games.

Not much needs to be said about the No. 1 5A team as the Briarwood Lions continue to sit atop the standings with an overall record of 15-2. They split a series with Oak Mountain in their most recent outing and are set to compete in Mountain Brook’s spring break tournament, a tourney in which they could easily win.

Sitting just behind at No. 4 are the Calera Eagles with an overall record of 14-8. Calera has been one of the best teams across the state this season due to some strong pitching, which has also given them a 3-0 record in area play. The Eagles have, however, hit a rough patch, losing three straight games. One of which was to Thompson, but the other two were to two top five teams in Hoover and Spanish Fort (by one run).

In the 2A classification, the Vincent Yellow Jackets jumped back into the top 10 for the first time in a few weeks. Vincent currently sits at 10-5 on the season and picked up two big area wins over Woodland last Friday. The Yellow Jackets have now won seven of eight after a slow start to the season.

With seven teams in their respective top 10, and all of them looking like they have the potential to be the best team in the state, baseball in Shelby County is back and better than ever.

By ALEC ETHEREDGE | Sports Editor WOODLAND – Vincent is off to a strong start on the 2017 baseball season, and... read more