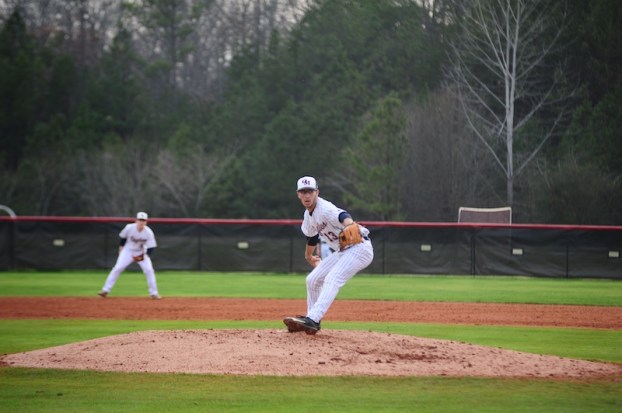 Oak Mountain's pitching staff was dominant in the Gulf Coast Classic picking up a complete game in four of their six outings, including one from Joseph Hartsfield pictured above. (Reporter photo/Alec Etheredge)

GULF SHORES – Heading into spring break, the Oak Mountain baseball squad was on a roll giving up three or less runs in seven of their last eight games, a trend they carried over to the week of spring break on their way to winning six straight games and the 2017 Gulf Coast Classic.

The Eagles gave up two or less runs in all but one of those six wins showing how strong their pitching staff is becoming, which is key to stringing together six wins in four days to win a tournament of this magnitude featuring 40 of the best teams from around the country.

After an average 6-5 start to the 2017 season, Oak Mountain has turned on the afterburner over their last 17 games going an unbelievable 15-2 during that stretch to move to 21-7 and jump all the way from unranked to No. 10 in Class 7A.

In their first five games of the tournament, the Eagles took down Shoals Christian 11-0, Sweet Water 9-1, Oneonta 9-2, Clarksville 7-0 and Decatur 5-4, before facing off against Normal West in the Championship game on Thursday, March 30. In four of those five games, Caleb Floyd, Gene Hurst, Joseph Hartsfield and Scott Fleming each pitched a complete game combining for 30 strikeouts.

In the championship game, Oak Mountain put together a consistent offensive effort, as well as another strong performance on the mound on their way to a 7-2 win over Normal West High School out of Illinois.

The Eagles fell behind 1-0 after the top of the first thanks to a single, double and sac fly from the Wildcats. Oak Mountain answered back very quickly in the bottom half of the inning without recording a hit thanks to great base running from Ethan Holsombeck.

After getting on thanks to a one-out walk, Holsombeck advanced to second on a passed ball and then to third on a balk by the pitcher. He then was able to come home on another passed ball before Mason Williamson lined out to end the inning.

Carlton Lucas got the start on the mound for the Eagles and after giving up that first inning run, he locked in allowing no runs over the next four innings.  Oak Mountain on the other hand was able to put two more runs on the board in the second inning this time with just one hit.

Floyd singled to start the inning before Normal West’s pitcher walked two batters and hit another to bring the Eagles’ second run home and load the bases. Holsombeck came back to the plate and reached on an error by the shortstop to bring home another run and give Oak Mountain a 3-1 lead after two.

Holsombeck, Logan Sheaffer and Floyd all had RBI singles over the last few innings to bring home four more runs, while Lucas only gave up one in the top of the sixth before Kade Sanders came in to get the last few outs and preserve the 7-2 win.

Floyd went 3-4 in the game with an RBI to pace the Eagles, while Holsombeck was shortly behind going 2-3 with a walk and an RBI. Both also scored two runs in the championship win.

As strong as Oak Mountain has looked the last few weeks on both sides of the ball, they are poised to make a run at a state championship.

By ALEC ETHEREDGE | Sports Editor COCOA, Florida – After a 6-6, .500 start to the season, the Pelham Panthers... read more