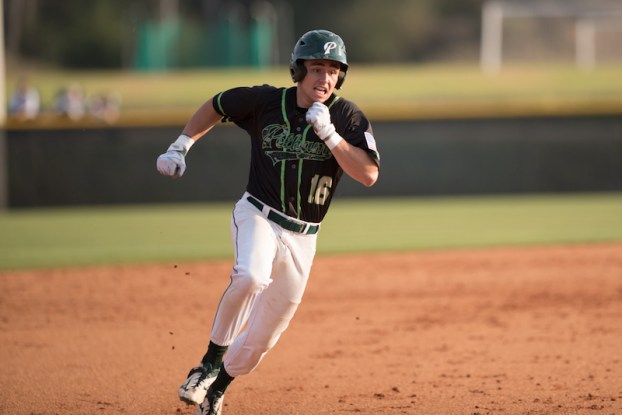 Garrett Stonicher had two stolen bases during the tournament, something that was key in Pelham's two wins of the tournament. (Reporter photo/Keith McCoy)

COCOA, Florida – After a 6-6, .500 start to the season, the Pelham Panthers hit a rough patch losing four in a row heading into a spring break tournament in Cocoa, Florida. While they lost their first game to extend the losing streak to five, they won two of the next three to go 2-2 in the tournament against some tough high school baseball talent.

The Panthers were playing in the Space Coast Spring Training tournament, which took place at the Space Coast Stadium where several major league teams have competed in spring training over the years.

Game one of the tournament saw Apple Valley outhit the Panthers 11-6 on their way to a 7-3 win. Early in the game, Pelham looked strong answering Apple Valley’s two-run second inning with a two-run third inning and then adding a third run in the fourth to give them three unanswered and a 3-2 lead.

Dalton King was able to keep the Panthers going on the mound pitching three consecutive scoreless innings before Apple Valley ended the game with five unanswered as Pelham’s bats struggled the remainder of the way.

Six different Panther players picked up a hit in the game, while Kasey Clark had their only RBI.

Pelham had a much more consistent game in game two, scoring every other inning for the first five innings of the game as they picked up a 5-2 win to end their five-game skid.

The Panthers started out with a three-run outburst in the top of the first thanks to two walks, two hit batters, an RBI groundout by Will Pierce and an RBI single by Dalton King.

King went 2-4 at the plate with two RBIs to lead Pelham, while Clark also had a multi-hit day going 2-3 with two runs scored. Long also added two RBIs for a balanced attack from the Panthers.

Pelham really struggle in game three as they were outhit 19-0 and fell 12-2 to Green High School. The pitching was the real difference maker as Long and Chris Williams combined to give up 11 runs and 16 hits in their 4.2 innings pitched.

While they weren’t able to pick up a hit in the game, the Panthers did a good job of playing small ball in the third inning as they brought home three runs thanks to a hit batter, an error and a sac fly.

The Panthers didn’t let their tough loss to Green bother them as they took back to the field less than 24 hours later against St. Francis to pick up a 3-2 win, which might be the most impressive part of their tournament.

After losing a 12-2 blowout game where they didn’t pick up a hit, it could’ve been easy for them to come back and lack intensity, but instead they gathered some confidence.

While they were outhit 3-2, the score went the opposite way thanks to great base running when they were on board. Mitchell Rottier, Long, King, Garrett Stonicher and Noah Golden all picked up at least one stolen base in the game, which was key to the win.

Long led the way going 1-1 with two RBI, two walks and a run scored. Clark picked up the other RBI, while Stonicher had their second hit. Rottier went 0-1 with a walk at the plate, but scored twice in the game.

Pelham moved to 8-12 after the tournament and with them sitting at 0-3 in area play they will take on Chelsea in a very important area series the first week after spring break.

By ALEC ETHEREDGE | Sports Editor ALEXANDER CITY – If the Chelsea Hornets hadn’t established themselves as being back, well... read more