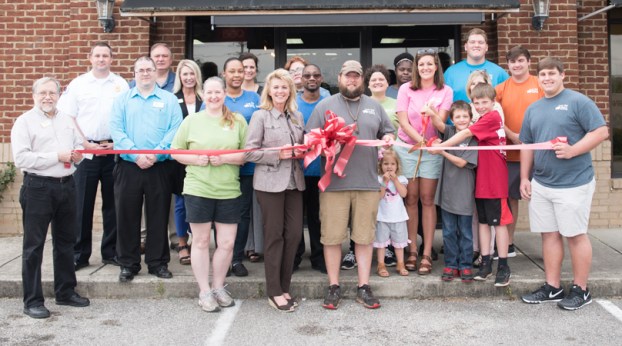 ALABASTER- The owners of Lazy Boy BBQ celebrated the opening of their second location at their grand opening and ribbon cutting ceremony on at 10:30 a.m. Thursday, March 30.

“We’re so excited. Alabaster is not our first spot, but it’s home to us, and we couldn’t be more proud of it,” Tommy Pippin said.

Sherrie Pippin said Lazy Boy BBQ started out as a food truck, which catered events through the Birmingham area. They later opened a smokehouse in Old Town Helena on in December 2015.

Recently, the Alabaster location opened an outdoor patio for guests to eat. According to Sherrie Pippin, they are working on receiving their liquor license.

To engage with the community, Tommy Pippin said Lazy Boy BBQ is hosting Spirit Nights every Tuesday evening to give local schools, sports teams and organizations the opportunity to raise money.

“If a group needs a fundraising event, we will cook and serve the food, and they’ll help greet people and refill drinks,” Tommy Pippin said.

Tommy Pippin confirmed a percentage of the sales Lazy Boy BBQ makes on Spirit Nights will be donated to the group.

During football season, special events will be held at the restaurant after home games.

The Pippinses said running a family business from two locations and a food truck requires a joint effort.

“If I’m at the location in Helena, she’s here, and vice-versa,” Tommy Pippin said.

Alabaster Mayor Marty Handlon expressed her gratitude for the Pippinses investment in the community.

“We want to thank them for helping us to meet our goals. It’s important that they know how they’re appreciated,” Handlon said.

Tommy Pippin said he hopes his family’s restaurant will become a staple in the Alabaster community, and he looks forward to a bright future in the city.

“There’s something about southern barbecue in that south that is unique. No two barbecue places are alike,” Tommy Pippin said. “We’re hoping that Alabaster views us as their barbecue place.”

Lazy Boy BBQ is located at 9300 Alabama 119, and is open from Tuesday through Saturday from 11 a.m. to 8 p.m. For more information about Lazy Boy BBQ, visit its Facebook page or its website at Lazyboybbq.net.