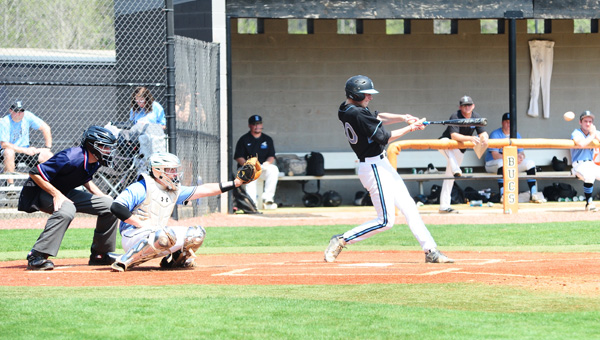 Will Battersby connects on a pitch against Helena on Wednesday, March 29, in Spain Park’s opening game of the Buccaneer Classic baseball tournament. (REPORTER PHOTO/STEPHEN DAWKINS)

The Jaguars lost their opening game to Helena, bounced back to defeat Hartselle, suffered a second loss to Calera, shut out Pell City before losing a shootout against Austin, defeated Spanish Fort impressively and were knocked out of the tournament by Hoover.

The Huskies pounded out nine hits in the tournament opener, and Spain Park could not get anything going against Huskies starting pitcher Riley Davis until the game was all but in hand.

HHS took a 3-0 lead in the bottom of the first inning on a home run by Sam Praytor and a single by Troy Cordrey.

In the bottom of the third inning, James Davis started things off for Helena with an infield base hit, which was followed by a hit from Praytor and a walk to William Brophy.

After a strikeout for the first out of the inning, Cordrey singled to drive in two runs and Nicholas Ragsdale homered on a line drive to left field, and the Huskies had a commanding 8-0 lead.

Spain Park finally scratched a run across in the top of the fifth.

Helena made the score 10-1 in the bottom of the fifth inning, and the Jaguars added two more runs in the seventh inning.

Jacob Dickinson took a leadoff walk, advanced on a single by Davis Holley and an error and scored along with Holley on a hit by Luke Blackmon that chased HHS pitcher Davis.

Brett Walton recorded the last out of the game.

Davis allowed three runs, two of which were earned, on five hits and five walks in 6 2/3 innings while striking out four.

In a 12-5 win over Hartselle on March 29, the Jaguars plated four runs in the third inning and six runs in the fifth for a comfortable win.

Every Jag in the starting lineup had at least one hit, and Will Battersby had two, including a triple and a walk, producing two runs scored and four RBIs.

Jarrod Kennington started the game on the mound for Spain Park, allowing two runs on five hits and three walks in 3 2/3 innings.

Spain Park managed five runs in a 12-5 loss to Calera on Thursday, March 30, despite recording only two hits.

The Jaguars started play on Friday, March 31 with a 3-0 win over Pell City in which Peyton Sanderson went 3-4 at the plate and Battersby pitched a complete game shutout, allowing one hit and two walks while striking out five.

But the day ended with a 9-8 loss to Austin.

Three errors hurt the Jags, who lost despite Will Evans going 2-4 with two RBIs. Lane Willis and Mee each scored two runs.

Spain Park won its first game, 7-0, over Spanish Fort in the single-elimination portion of the tournament on Saturday, April 1.

Justin McClure allowed four hits and no walks in seven scoreless innings while striking out two.

Jacob Rich helped provide the offense with a 2-3 performance at the plate with a walk, two runs scored and one RBIs.

Spain Park’s tournament appearance ended with a 10-0, five-inning loss to crosstown rival and tournament host Hoover. The Jags produced only one hit in the game.