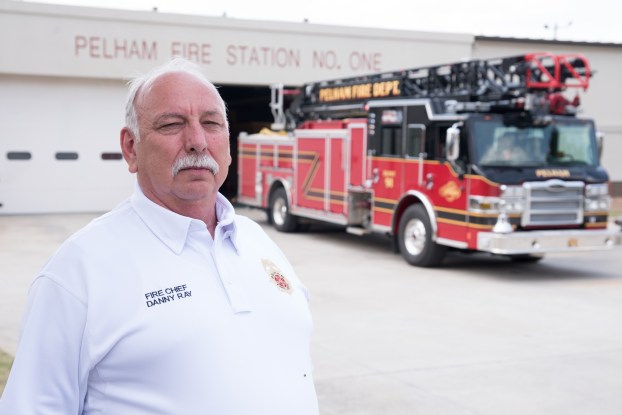 Fire Chief Danny Ray will retire from the Pelham Fire Department on May 1, with his last day on the job being April 28. (Reporter photo/Keith McCoy)

PELHAM – After more than 38 years of serving his community, Fire Chief Danny Ray will retire from the Pelham Fire Department on May 1, with his last day on the job being April 28.

For the past eight years, Ray, 57, has been in charge of a department that consists of nearly 80 people, five fire stations, four first-line engines, three reserve engines, a 75-foot ladder truck, eight staff vehicles and an array of HazMat, scuba, surface water, and technical rescue equipment.

Ray, who was appointed fire chief by former Mayor Don Murphy, has known since he was a little boy that being a fire fighter would be how he would help and give back to his community.

Being the son of the man who helped start Pelham’s volunteer fire department in the 1960s and later became fire chief, being a firefighter was ingrained in Ray at an early age.

“My friends and I stayed hanging out around the station trying to see what we could get in to,” Ray said.

In the ‘70s, the department didn’t have 24-hour dispatch services so at night the calls were transferred to Ray’s house.

“We had a second phone that sat right outside of my parents’ bedroom and we used to answer the dispatch phone calls,” Ray said. “We received dispatch calls at our house for about five years, until 1975.”

“When we went on calls I operated the pump on the fire truck,” Ray said. “I remember my dad waking me up to go to a fire in Indian Hills one night on Christmas Eve. I remember just looking at the gifts under the tree as we headed out the door.”

Ray was a volunteer firefighter until he graduated from Pelham High School in 1978. In 1977 the city hired its first full-time fire fighter, and Ray was a construction worker until he was offered a job in the department in 1979.

“It seems like it has gone by quick,” Ray said.

Ray said not coming into work every day will be a big adjustment.

“It’s going to take a lot of getting used to,” Ray said. “I grew up in the generation of wanting to serve and wanting to help people. I’ve been a part of and serving this community for just about my entire life. I think there will always be a want and desire to be a part of it.”

For the first few months of retirement, Ray said he already has activities planned to keep himself busy. Ray and his wife, Robin, are planning to spend most of the summer in Minnesota visiting family. Ray said the trip will also include a trip to Canada on his motorcycle.

When Robin retires in three years, the couple plans to retire to Lay Lake. The couple bought property on the lake and has plans to build a house there.

“I’m just going to fish and have fun,” he said.

“He’s put the budget together for the past two years, so he already knows how to do that, which is probably one of the biggest responsibilities,” Ray said. “I’m stepping back and letting others step in. I’ve gathered up most of my stuff and the main thing I’m doing now is signing bills and going around to the stations to visit.

“It’s been a pleasure to work with everyone that I’ve worked with for the past 38 years, both in the community and within the department,” Ray said.

The city is hosting a retirement party for Ray on May 1 at the Pelham Civic Complex.