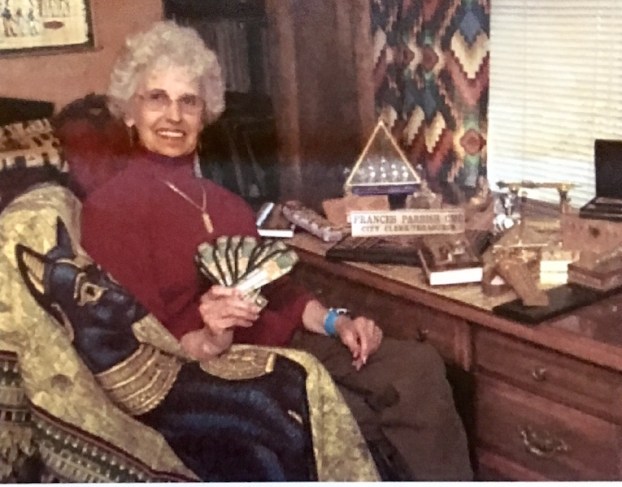 Frances Marilyn Wood Parrish pictured in her home in 2008. (Contributed)

Ms. Frances grew up in Maylene, the youngest of eight siblings, four boys and four girls. She became the matriarch of a fine lineage that included three sons, six grandchildren and six great-grandchildren.

In 2008, at the time of my interview, she was 75 years old and sharing her 1928 clapboard home near Old Town with two cats and her Alaskan Husky, Queen.

Ms. Frances was a vibrant personality who also happened to be an avid collector of all things Egyptian. She traveled to Egypt in 1994 with the Metaphysical Society of America.

Sharing with me details about the trip, she said the tour group made a nighttime visit to the depths of a private pyramid, where she told me, she felt a unique vibrational energy. Each person also had the experience of lying down in a real sarcophagus.

Ms. Frances also visited Indonesia with the same group and in 2007 took an Alaskan cruise with her traveling companion, Edna Earle Goodwin.

Also in her home that day were other Egyptian relics—a Pharaoh tic-tac-toe game, a King Tut clock, an Isis beach towel.

On her desk was a Nefertiti notepad and ankh-handle letter opener; even her typewriter was covered in an Egyptian motif fabric custom created by her niece, Debbie Cates.

In the days behind her city office desk, she was often adorned in gold ankh earrings and her cartouche necklace, which read (in hieroglyphics) Frances on the front and Parrish on the back.

Ms. Frances’ collection of pyramids (acquired through the years from family and friends) ranged in size from an engraved one and one-half inch stone version to a 3-foot-tall lighted pyramid lantern. She had, too, a snow-globe pyramid that swished with golden desert sand.

A favorite pyramid, a gift from her longtime and close friend, Jane B. Holmes, held a glowing lighted statue of Horus within an ornate base.

At the time of my visit Ms. Frances had unapologetically relegated keeping a perfect dust-free house to the bottom of her priority list.

“One lifetime is not enough to learn all we need to learn,” she told me, “But this one has been a good one and I intend to squeeze from it every last drop of enjoyment!”