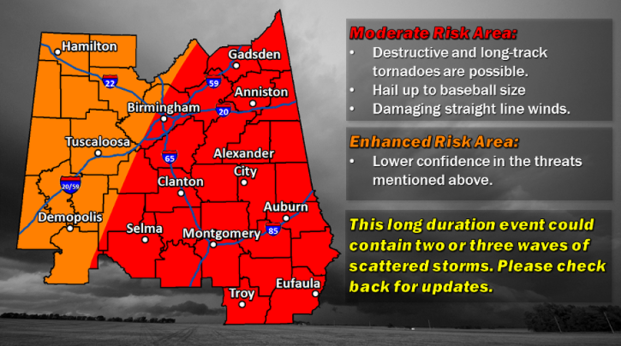 Shelby County is one of the areas expected to be moderately at risk for tornados, hail and straight-line winds on Wednesday, April 5. (Contributed)

The National Weather Service in Birmingham announced that a severe weather outbreak is possible in several areas around the Southeast.

According to meteorologist Nathan Owen, there will be a moderate risk for long-track tornados, baseball-sized hail and damaging straight-line winds in Shelby County and other areas from 4 a.m. to 9 p.m. on Wednesday, April 5.

“The main thing is the possibility of strong tornados in the area. If there will be tornados, we don’t yet know how strong they will be or where they will hit,” Owen said.

As of 6 p.m. on April 4, Shelby County Schools, Pelham City Schools, Alabaster City Schools and several private schools announced that they will be closed for the entire day. Classes are cancelled at the University of Montevallo.

“It’s hard to say how the weather is going to affect individual lives,” Owen said.

Owen encouraged residents to use this time to prepare for the weather tomorrow by reviewing a weather plan and keeping a close eye on weather forecasts.

“Don’t just rely on one source. Your weather radio may run out of battery or your phone might die,” Owen said. “Reviewing your weather plan right as the storms come in is not the best idea. Have multiple ways to keep yourself updated on the weather and receive shelter.”

Governor Robert Bentley declared a statewide State of Emergency, which went into effect at 6 p.m. on April 4. According to a press release from Bentley’s office, the State of Emergency will “remain in effect until the threat diminishes.”

“Alabama is no stranger to the impact severe weather can have on communities and the devastation that can occur when the weather takes a turn for the worse,” Bentley said.

For more information about the severe weather situation, visit the National Birmingham Weather service at Weather.gov/bmx or call 664-3010 and press 2 for weather information.

FROM STAFF REPORTS COLUMBIANA–A team of assessors from the Commission on Accreditation for Law Enforcement Agencies, Inc., will arrive on... read more