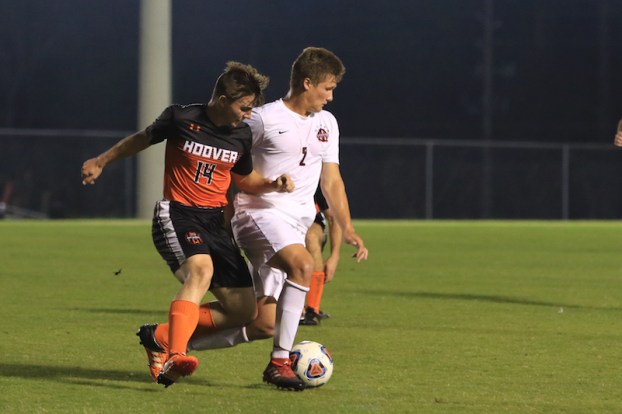 The No. 1 Oak Mountain Eagles fought to a 0-0 tie with Hoover in their first game back from spring break. (For the Reporter/Dawn Harrison)

Spring break has come and gone meaning soccer is back after a one-week hiatus and all is right in Shelby County. Several teams kicked off the second half of their season on Monday and Tuesday as they look to finish strong in area play and make a push toward the postseason.

Defense was at a premium when the No. 1 Eagles hosted No. 7 Hoover on Tuesday night as the two top soccer programs battled to a 0-0 tie. Hoover went into spring break with two consecutive losses, while Oak Mountain also went into the break with a loss to Mountain Brook.

It had to be nice for both teams to see they can compete with the best of the best, especially on the defensive end of the field, which is where a championship will be won. The Eagles are now 10-3-3 on the season and the firm 7A No. 1 team.

It has been an extremely inconsistent season for the Huskies having not put together back-to-back wins since March 2 and 8. After losing two straight going into the spring break holiday, Helena rebounded nicely with a 7-4 win over McAdory. The win pushed the Huskies back above .500 with an overall record of 8-7-1.

Briarwood picked up their third area win of the season and their second over Woodlawn this year after taking down the Colonels 5-0 on Tuesday night. The win sent them to 9-4-3 overall and 3-0 in area play, and with just one area game left to play against Calera the Lions have already clinched a spot in the playoffs.

After losing just their second game of the season to Homewood heading into spring break, No. 1 Westminster at Oak Mountain responded with a big 3-2 area win over Holy Spirit Catholic on Monday. The Knights improved to 11-2-1 overall and 3-0 in area play with the win.

Spain Park went into the break with a very tough 6-0 loss to Oak Mountain, but before that loss the Jags had picked up six consecutive wins. Coming back from the break they got back to their winning ways with a 3-0 victory over a very good 15-5 Prattville team. The Jags now have an overall record of 9-2-1 and sit at 1-1 in area play with some big matchups over the last three weeks of the season.

Thompson’s girls have hit a rough stretch as of late losing four of their last five games after falling 1-0 to the Spartans. They still hold an 11-7-2 overall record, which is highly impressive, but sit at 1-2 in area play meaning they need to win all three of their remaining area games.

It was senior night for the Helena Huskies and they sure acted like it picking up their fourth win of the season in a 10-0 route of McAdory. The Huskies had lost three straight and seven of eight going into spring break, but sitting at 4-12-2 and 1-1 in area play, there is still plenty of soccer left and a strong possibility they make the playoffs.

Briarwood won their third game in a row after taking down Westbrook 4-0 on Tuesday afternoon to move to 7-4-2 this season. They are currently 1-0 in area play and are considered one of the favorites to win a state championship out of all 5A girls teams. The Lions have only lost one game since March 3, a 2-1 decision to Mountain Brook.

In the second of a four game road trip the Knights got an important 5-4 area win over Holy Spirit Catholic. After losing three of four heading into spring break, the win was a much needed confidence boost to start the second leg of the season. They are now 7-3 overall and 1-0 in area play.