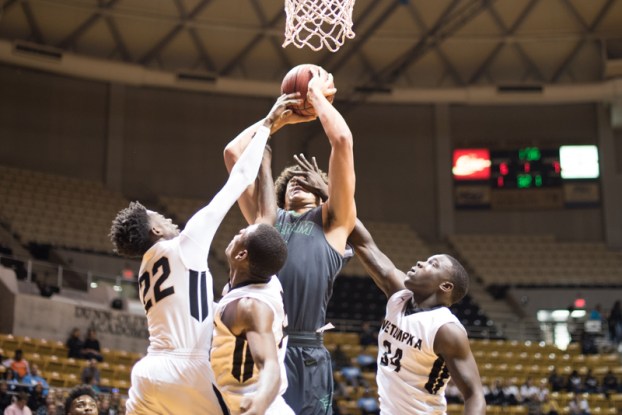 Alex Reese spent much of the season battling through injuries and triple teams like above, but still managed to average a double-double leading to being named the third best player in the state. (File)

Reese makes Super 5 team, named 6A Player of the Year

MONTGOMERY – The postseason accolades continue to roll in for Alabama commit and Pelham senior basketball standout Alex Reese as he was named the 6A Player of the Year and to the Super 5 team by the Alabama Sports Writers Association during the annual awards banquet held in Montgomery on Tuesday, April 4.

After leading the Panthers to 23 wins this season and a trip to the Elite 8, Reese was named to the Shelby County first team and as the Shelby County Player of the Year before bringing home the award of the state’s best 6A player and being named one of the five best players from across the state.

While Mae Jemison’s John Petty made history by becoming just the second player to ever win back-to-back Mr. Basketball’s, Reese also did something special. It marked the second consecutive season he was named to the Super 5 team, which ranks the best players in Alabama regardless of classification, and not only did he make the team he finished just behind future Alabama teammate Petty and Mountain Brook’s Trendon Watford to take third in the voting.

Petty picked up 65 points, including 13 first place votes to run away with it, while Watford tallied 38 points, just two ahead of Reese’s 36.

Last season, Reese was the fifth and final member of the team showing the improvement’s and adjustments made this year. Despite his averages going down from 25.4 points, 12.1 rebounds and two blocks per game to 21 points, 10 rebounds and 1.5 blocks per game, he was never 100 percent healthy and dealt with double and even triple teams throughout the entire season.

“I had to lock in mentally before games more,” Reese proclaimed in his Shelby County Player of the Year interview. “It was tough because they always do come after me first, but being focused mentally was the difference maker.”

Clearly his locked in focus worked as he was still able to average a double-double. It had to be frustrating for him to deal with missing several games during his senior season due to injury, never being fully healthy and had to battle through every team focusing solely on making sure he doesn’t beat them, but his mentality proved stronger than what anybody or anything could throw at him during his final ride as a Pelham Panther.

“The experience of seeing those guys focus on him over the years was a difference maker,” Pelham head coach Joel Floyd said. “Being a senior, it was nothing new to him this year because he was so much more mentally mature.”

Reese and Petty will now team up at Alabama where they will also be joined by 4A Player of the Year Herb Jones out of Hale County as the three look to bring together their superb talents.

“Being able to play at the next level against SEC-caliber competition will be a fun challenge that I’m excited for,” Reese said of what he expects as he continues his career. “We get to play teams like Texas next year at the BJCC and playing against other big time teams around the country, that’s something I really look forward to.”

Reese will leave Pelham with an array of different awards, but nothing is more impressive than the 2,100 points and 985 rebounds he accumulated on his way to leading the Panthers to an 88-36 overall record during his four-year tenure.

A college softball game between Auburn and Samford scheduled for Wednesday, April 5 at Spain Park High School has been... read more