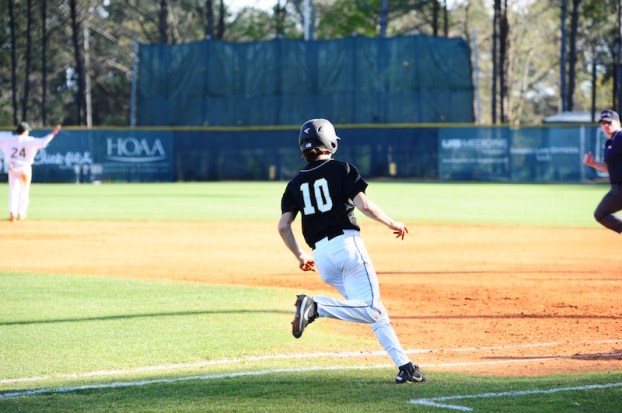 Vincent’s Ryan Childers prepares to round first base after picking up his second single of the game. (Reporter photo/Alec Etheredge)

MOUNTAIN BROOK – Vincent traveled to Mountain Brook on Tuesday, April 4 for a matinee baseball game between the 2A No. 10 Yellow Jackets and the 7A Spartans.

It’s been a strong start for Vincent and head coach Ryan Halla this season having jumped into the 2A rankings on two different occasions now, but they ran into a Mountain Brook team that has started hitting their stride over the last few weeks as the Spartans claimed a 7-2 win.

Although the score didn’t look extremely close, Vincent (11-7) held their own for the most part going into the fifth inning in a 2-2 tie.

Each team put up a run in their half of the first inning starting with the Yellow Jackets. Vincent picked up the first run of the game thanks to a single from Robbie Albright, which eventually brought home Ryan Childers thanks to an error by the Spartans’ right fielder.

Mountain Brook answered back quickly in the bottom of the first with a run of their own. After a double play emptied the bases and put two outs on the board, the Spartans picked up a single from Sam Jeffcoat, who was driven home two pitches later on a double by Clay Stearns to tie the game at one apiece at the end of the first.

After a quiet second inning and top half of the third, Mountain Brook put together the next threat after three singles from Joey Keating, Jeffcoat and Patterson Ware brought home their second run of the game to take a 2-1 lead.

Vincent used some great base running in the top of the fourth to answer the Spartans one-run bottom of the third with a one-run inning of their own. After a pickoff attempt by Mountain Brook went awry, the Yellow Jackets’ John Allen was able to score all the way from second to tie the game at two.

Cole Fincher got the start on the mound for the Yellow Jackets and went two innings allowing three hits and one run before giving the ball over to Childers. Childers pitched 2.1 innings giving up five hits and four runs, two of which were earned.

Childers was by far Vincent’s leader at the plate going 2-3 with a run scored. Albright and Zachary Burrage were the only two Vincent players to pick up a hit for the Yellow Jackets’ during the game.

The Spartans were led by Keating who went 3-3 with a double and an RBI, while also scoring three runs. Mountain Brook used seven different pitchers throughout the seven innings to keep Vincent’s batters confused.

By ALEC ETHEREDGE | Sports Editor To show how improved baseball is across Shelby County, last year combined between both... read more