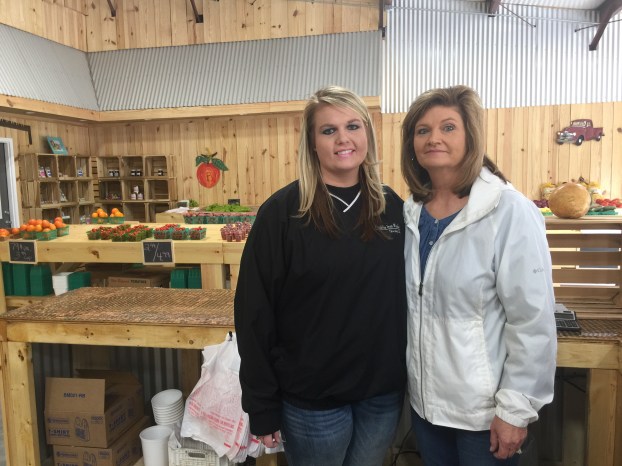 Thorsby-based Burnette Farms built an 8,000-square-foot brick and mortar farmers market on Alabama 261 just past Church of the Highlands but before Dollar General. The business is run by husband and wife Michael and Mary Charles Burnette and their daughter Jenny – a family of fourth generation farmers.

Burnette Farms Market will be a year round market – open Monday-Saturday from 9 a.m. to 6 p.m. and on Sundays from 1-6 p.m.

“We received a lot of positive feedback on Saturday,” Jenny Burnette said. “The turnout was overwhelming in the best way.”

“People told us that they’re thrilled to have us here,” Mary Charles Burnette added.

Jenny Burnette said Burnette Farms grows strawberries, peaches, plums, nectarines and tomatoes and other fruits and vegetables are brought in on a daily basis from nearby farms. In addition to produce, the market will sell specialty dog treats, handmade soaps, plants, boiled peanuts and more.

Because some foods are not fully in season here in Alabama, Jenny Burnette said some produce is being brought in from farms in Florida. But by June she said 90 percent of the fruits and vegetables at the market will be from farms located in Chilton and Blount counties.

“For years we’ve sold our produce at Pepper Place in Birmingham, the Alabaster Farmers’ Market and other markets in the area, but we wanted something that was more than just one to two days per week,” Jenny Burnette said. “We looked at several lots in different places and this one just fit our needs the best. We’re close to Helena, Alabaster and Hoover so it’s a good location, too.”

The family plans to open a clothing and gift shop, Mary Michael’s Boutique, at the site in June and a homemade ice cream parlor next summer.