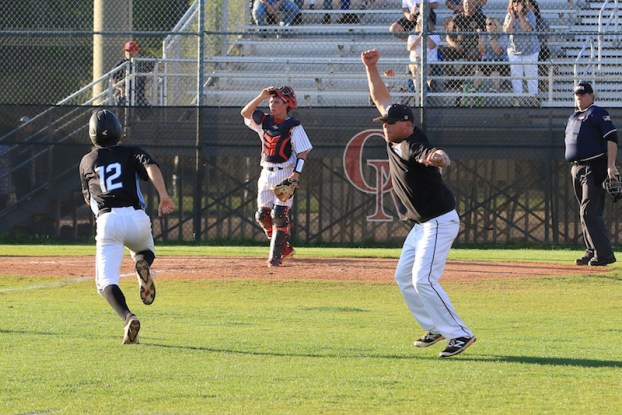 Helena head coach PJ Guy motions for the base runner to round third and head home during the Huskies’ 4-0 win over Oak Mountain on Tuesday, April 4. Both teams were in the top 10, but Helena is the new 6A No. 1 team. (For the Reporter/Dawn Harrison)

The Alabama Sports Writer’s Association (ASWA) is comprised of sports writers from across the entire state of Alabama, a group I am considered lucky enough to be a part of so my voice can be heard to represent the great high school sports teams in Shelby County.

There comes a time, however, where my voice is tiny and the ASWA botches something, which is the case in this week’s baseball and softball rankings. While the final decision makers did get one thing right in naming the Helena Huskies and Briarwood Lions as the No. 1 teams in their respective classification, they pretty much kept every other team from the county lower than where they should be.

A week ago, I proclaimed that baseball in Shelby County was as good as it’s ever been having a season-high seven teams featured in the rankings. This week, while there are still five teams inside their respective top 10, all of them besides Helena and Briarwood either completely dropped out of the rankings, fell spots or were ranked in the same position as the previous week after three won spring break tournaments and the remaining four had strong showings.

We’ll start the berating with Oak Mountain slipping from No. 4 to No. 5 in the most recent rankings. The Eagles are coming off of a Gulf Coast Classic win where they put together six straight wins including three over other ranked teams from across the state. They had won 15 of 17 coming out of the break before losing to No. 1 Helena on Tuesday, April 4.

Oak Mountain was jumped by the Buccaneers, who lost in the championship game of their tournament on their own turf to Helena, while the Eagles beat a great team out of Illinois to win a national tournament, making their fall extremely unwarranted.

Spain Park altogether fell out of the rankings after going 3-4 in the Buccaneer Classic, but the Jags still sit at 16-10 overall and two of their three wins in that tournament were over other ranked teams. While they could still easily be in the top 10 they can jump back in with a couple of area wins this week. Grissom, who went 1-3 during the week was probably more deserving of falling out than the Jags.

Moving down to 6A, the Helena Huskies were the only team in the spot they deserved coming in at the No. 1 spot after putting together seven straight wins to take the Buccaneer Classic. That included wins over Hartselle, Hoover and Spanish Fort, all of which are currently ranked.

After beating Oak Mountain in their first post spring break game, the Huskies have won eight in a row and 15 of their last 16 games.

The Chelsea Hornets moved up one spot from No. 7 to No. 6, and this could just be me being overzealous, but that’s not enough. Rankings are about what you’ve done for me lately, and lately the Hornets have been one of the hottest teams in the state next to Helena, Oak Mountain and Briarwood.

Chelsea won six straight games to go 6-0 in the Lake Martin Classic and improve their record to 20-7 overall before taking down Pelham 11-1 in their first game back from spring break. They are now 14-3 over their last 17 games and have won seven in a row and eight of their last nine games.

Class 5A is probably the one I am the most okay with. Briarwood is still the No. 1 team and after winning 14 of 15 and only posting two losses this season, they have established themselves as a solid championship contender in 5A.

Calera dropped a few spots from No. 4 to No. 8, which is understandable after going 3-4 in the Buccaneer Classic. The Eagles are the only double-digit loss team in the top 10 and for good reason. They’ll bounce back and get to 20 wins very shortly.

In 2A Vincent dropped out of the top 10 after taking the 10th and final spot a week ago. This is another one that is understandable after going 1-2 since those rankings, but the tough talent they faced will help them in the long run.

Moving down to the AISA top 10 and you’ll find my last complaint, which is the fact that Kingwood is nowhere to be found. I have lobbied for the last four weeks and they have yet to crack the top 10, receiving a nomination spot every time. The Lions have won five in a row and eight of their last nine games scoring 55 runs in their last five contests. They now sit with an overall record of 17-6, which is a better record than three teams sitting in the top 10.

While these rankings mean nothing in the long scheme of the season, these teams deserve a little more respect, which is something continuing to win will solve.