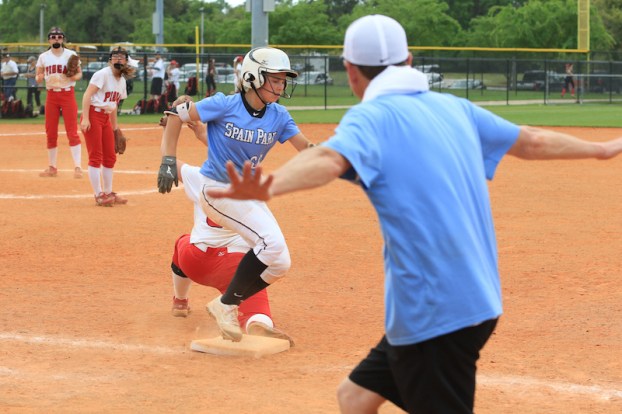 Spain Park assistant coach Johnny Camp gives an emphatic safe signal as Annabelle Widra tries to beat the throw to first base during the 2017 Gulf Coast Classic. (For the Reporter/Dawn Harrison)

There were plenty of unwarranted changes in the latest ASWA baseball rankings, and I have already dealt with that, but what transpired in the most recent softball poll may be even worse. It’s almost like this week it was decided to change things up just to keep it interesting as nine new No. 1 team’s took over combined between baseball and softball’s 16 classifications.

The most absurd of which was the Spain Park Jaguars falling from the paramount top spot in the 7A rankings. This change came due to defending state champ, Sparkman, moving from No. 2 to No. 1, which I get the fact that they won a state championship in 2016 and are 28-3 overall this year. This, however, is 2017 and the Jags started 2017 with 22 consecutive wins including an easy 7-0 win over the new No. 1 Sparkman Senators.

After losing their first game of the season to Hewitt-Trussville, Spain Park traveled to Gulf Shores for the 2017 Gulf Coast Classic where they reeled off seven straight wins before falling 5-4 to Austin in the semifinals of the tournament. They are 8-2 in their last 10 games and have improved their overall record to 30-2 giving them two more wins and one less loss than the Senators, including that head-to-head win.

They have done nothing to lose that No. 1 spot that they held all year and it is very confusing as to how that decision was made. In the overall vision of things, it may be a blessing in disguise for the Jags.

While these rankings mean absolutely nothing, it could be something to fuel an already ignited Jaguar team that is looking to redeem their loss to Sparkman in last year’s state championship series.

The Thompson Warriors also competed in the Gulf Coast Classic and made it to the quarterfinals before falling 3-0 to the Jags. Thompson went 3-2-2 in the tournament overall and had won or tied in 12 of their last 15 games, which was good enough for the No. 10 ranking for the second straight week.

The Warriors did lose to Tuscaloosa County 3-0 in their first game after spring break on Tuesday, April 4, but still have an overall record of 16-7-2.

As we travel down a classification to 6A, the Chelsea Hornets had set atop the poll for the majority of the season until falling to No. 2 last week. This week they took another slide down one spot to No. 3. This drop is a little more warranted as the Hornets have lost four of their last seven games. Sitting at 15-6, Chelsea has lost three of their six games this season by one run, showing they are still an impressive team as they look to repeat as state champs.

The Helena Huskies find themselves just four spots behind the Hornets after dropping one position from No. 6 to No. 7. While the Huskies’ 14-9 overall record doesn’t jump off the page, their tough schedule does. Seven of their nine losses have come to ranked teams in the state including 7A No. 1 Spain Park and 6A No. 1 Chelsea at the time and current 5A No. 1 Mortimer Jordan twice.

All four of these teams are legitimate state championship contenders and throw in a Shelby County team that is 13-4 this year and you have five team’s that can make deep postseason runs.

By ALEC ETHEREDGE | Sports Editor Spring break has come and gone meaning soccer is back after a one-week hiatus... read more