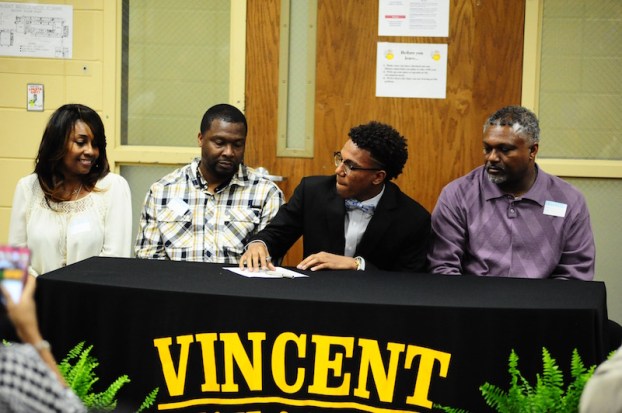 Maybe it’s his praise for God, maybe it’s the closeness of his family that he holds dearly, the character he carries himself with or the thoughtfulness to honor his coach with a basketball shaped plaque to show his thanks for the last several years of mentorship.

All of these are qualities that make Campbell not only a strong player on the basketball court, but a leader and gracious person off the court as well.

“We’ve done several of these over the last few years,” Yellow Jackets’ head coach John Hadder said. “Every guy that we’ve had sign a scholarship has been worthy of it and deserved it, but with Stephen, I could say so much about this kid because of the leadership he’s shown not just in basketball, but there’s not a better kid to represent our school and program.” 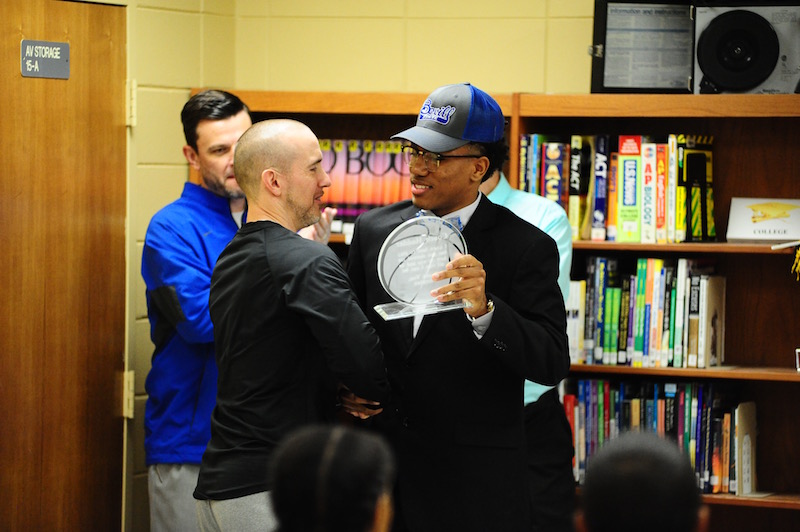 Campbell presents a basketball plaque to his head coach John Hadder, who has helped Campbell get to this point. (Reporter photo/Alec Etheredge)

Campbell averaged 21.1 points, 6.2 rebounds and 1.7 assists per game during his senior season for Vincent, which gave him the second most points per game in the county during the 2016-17 season trailing only Jamal Johnson’s 24.8.

“It’s tough sometimes to have your best player be one of your best character guys and that’s exactly what we had with him,” Hadder said. “I see these kids from 6th grade up and there was just something I always liked about Stephen.”

Hadder went on to say that there are typically a little over 500,00 high school basketball players in the country and just over three percent of them go on to sign a college scholarship making the signing ceremony a time for celebration.

“What he’s doing is rare and we are super proud of him and everything he has accomplished,” Hadder said.

Campbell led Vincent to yet another 20-win season, which has become the norm in Yellow Jacket country as he helped his team gather 21 wins during his senior year.

“I just want to thank God because without him I am honestly nothing,” Campbell said. “I have to thank my parents, family and friends for all of their support in getting me to this point in my life. I feel like they’ve all helped prepare me for this moment.”

Athletics at Bevill State took a break after the 2010-11 season and just reinstated all sports for the 2017 season meaning Campbell will be part of a rebuilding process. One thing is for certain, his character and athleticism will be a welcome sight for the school as Campbell will take his incredible skill on to the next level.

By ALEC ETHEREDGE | Sports Editor The Alabama Sports Writer’s Association (ASWA) is comprised of sports writers from across the... read more