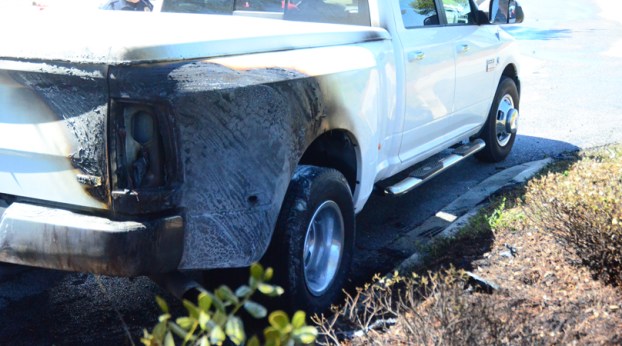 A car fire in Alabaster burned part of a vehicle’s bumper and a 20-by-20-foot area on a landscape median. Firefighters confirmed the fire started after the driver turned the engine off. (Reporter photo/Amalia Kortright)

ALABASTER- The Alabaster Fire Department and Police Department arrived in the parking lot of Regions Bank on Colonial Drive after a parked vehicle and a nearby landscape median caught on fire at around 2 p.m. on Friday, April 7.

While fires caused by vehicles that are turned off are rare, firefighters said they have seen similar situations. About a month earlier, firefighters responded to another fire at Buffalo Wild Wings on Colonial Promenade Parkway that was caused by a vehicle that was not running.

According to firefighters, this occurs most commonly on interstates when cars are pulled over on grassy roadsides.

The driver, Alabaster resident Steve Melton, said he never expected an incident like this would happen.

“I backed into the same spot that I’ve parked in 100 times before,” Melton said. “When I was in the bank, someone came in and told me a truck was on fire.”

Because the vehicle was loaned to Melton through his job, he said the damages are covered by insurance.

No injuries or deaths were reported.

“I was just lucky that somebody saw it soon enough,” Melton said.