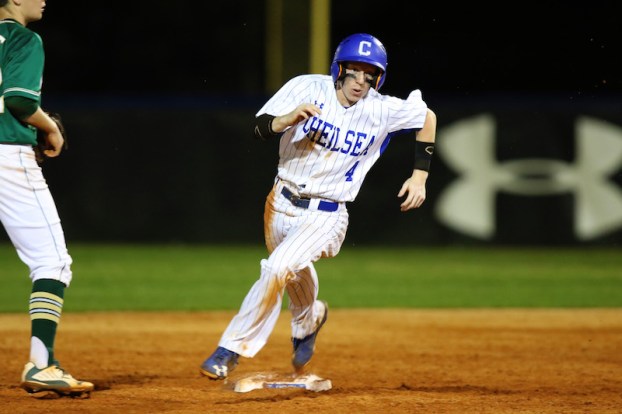 Clay DeWeese rounds second base during game one of the series with Pelham. He finished the series 3-10 with three RBIs and three runs scored. (For the Reporter/Cari Dean)

A year ago, the Chelsea Hornets’ baseball squad finished the season 12-20 and completely missed the postseason finishing behind area rivals Pelham and Helena.

Already, with close to two weeks remaining in the regular season, the Hornets have gathered an overall record of 22-8 and after taking down Pelham in both of their area matchups on Tuesday, April 4 and Thursday, April 6, Chelsea has clinched a spot in the 2017 playoffs.

Chelsea took on the Panthers in a three-game series going 2-1. With area play only consisting of your first home and away matchup with an opponent, the Hornets had their playoff clinch wrapped up after sweeping the first two games of the series 11-1 and 14-9.

Pelham would have mathematically still had a decent chance to finish in a tie with the Hornets had they won one of those two area games, but after getting swept by Helena and now Chelsea the Panthers will finish area play with an 0-4 record.

Chelsea and Helena on the other hand both sit at 2-0 and face off next week to see who will take home the area championship. Whether this Hornets’ team wins it or not, a guaranteed finish of at least 22-13 and a spot in the playoffs is cause worthy enough of celebration.

A consistent effort on both sides of the ball led Chelsea to an easy six-inning 11-1 win in game one of the series. That consistency included runs in all but the first inning and allowing only one run in one of those six innings.

That consistent pitching effort came from Sam Towery and Cameron Gage. Towery went five innings allowing one unearned run on an error and just one hit, while striking out six batters. Gage came in to get the save in the sixth and final inning allowing just one walk.

Hayes and Watkins led the way at the plate going a combined 5-7 with five RBIs. Hayes was an impressive 3-3 with three RBIs and a walk.

Game one put Chelsea one win away from clinching a playoff spot, and it was probably best to go ahead and get that win out of the way in game two rather than wait to try and pick it up in game with No. 1 Helena.

Pelham fought for their playoff lives, which created for an extremely entertaining game as the two teams went into the top of the fifth locked up at 9-9 before the Hornets ended the final three innings with five unanswered runs.

Pelham jumped out to a 4-0 lead in the bottom of the first thanks to a two 2-RBI single from Kasey Clark and a 2-RBI double from Will Pierce. Chelsea answered by putting up an eight spot in the top of the second thanks to four walks, a single, an error and a hit batter to start the inning. The highlight of the inning however was a one-out triple by Will Root that brought in two runs.

Pelham came right back in the bottom half of the inning with three singles, an error and a hit batter before two sac flies brought in their final two runs of the inning to tie the game at eight. Each team went quietly in the third before scoring one apiece in the fourth to tie things up at 9-9.

The Hornets used two doubles from Clay DeWeese and Jacob Burback in the sixth to start their string of five unanswered runs with three to take a 12-9 lead. Another double in the top of the seventh from Jacob Tinnell brought in their final two runs of the game to seal the deal at 14-9.

Gage and Emmitt Hudspeath were able to keep Pelham quiet over the final few innings, combining for just four hits, one unearned run and four strikeouts.

Burback led Chelsea at the plate going 2-3 with two RBIs and a walk, while Tinnell, DeWeese and Watkins all went 2-5 and combined for five RBIs.

The Panthers were led by Garrett Stonicher, who went 3-4. Pierce went 2-4 with two RBIs and Clark went 1-3 with three RBIs to also pace Pelham.

While game three meant didn’t count towards area play whatsoever, it was still a big confidence game for two rival teams, and Pelham made sure they walked out of the series with at least one win thanks to a 13-2 route of the Hornets.

While things were tied 1-1 after the top half of the third, the Panthers went off in the bottom of the inning with an astounding 12 runs. The used seven singles, four walks, an error, a hit batter and one double to all but put the game away.

The run support was plenty for Dalton King on the mound who went all five innings in a shortened run-rule game allowing just one earned run and three hits, while striking out five.