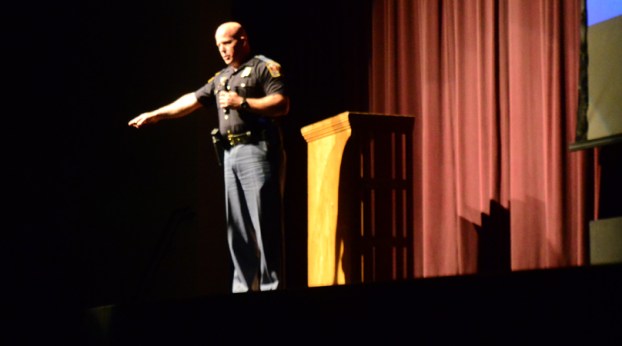 CHELSEA- Chelsea High School had an assembly for juniors and seniors about the dangers of drunk and distracted driving on the morning of Thursday, April 6.

“We have worked with numerous agencies to bring this to the students. I hope they will go out, think about this presentation and make good decisions,” CHHS Assistant Principal Cindy Coyle said. “Prom is Saturday, and we are hoping to make an impression on them so that they don’t drink or text and drive.”

Daniel said the state of Alabama is ranked number six in teen driving fatalities, many of those are attributed to driving while intoxicated or distracted.

“We kill almost 10,000 people a year because of drunk driving,” Daniel said. “This is real life. We take a 16-year-old, give them a driver’s license and fail to tell them that this is one of the most dangerous things you could do.”

“Every 15 Minutes,” which was staged and filmed by students two years ago, gave students a realistic portrayal of the repercussions of drunk or distracted driving. Current juniors and seniors watched as students their age were seriously injured, killed, jailed and faced emotional hardships as the result of a drunk driving incident.

“There are no accidents. You are responsible, and there are consequences,” Daniel said. “You can choose to disobey the law. There is one law you cannot disobey, and that’s Newton’s Law. I hope you never forget what you saw today, and I hope it changes your life.”

According to Daniel, one of the hardest parts of his job is having to inform the victims’ families after a drunk or distracted driving fatality.

Coyle said the school originally planned for this year’s juniors and seniors to stage their own version of “Every 15 Minutes,” but the event was cancelled due to inclement weather.

Burchfield said if this program saves at least one student’s life, the program will have served its purpose.

“Your families love you. Your friends love you. Do them a favor and make good decisions, because we can’t make those decisions for you,” Burchfield said.

By NEAL WAGNER / Managing Editor ALABASTER – Guy and Terri Allbrook never want another parent to experience what they... read more