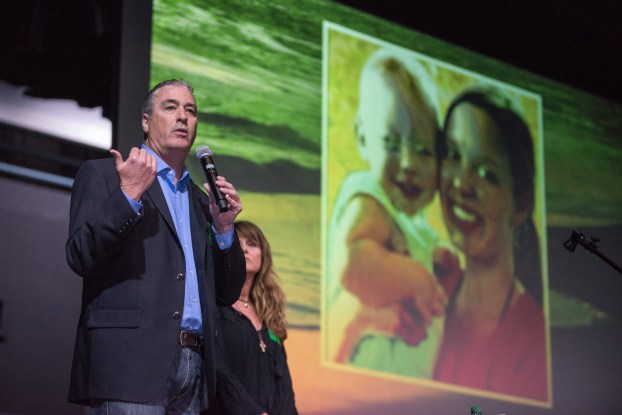 Guy Allbrook tells PHS students about his daughter Nicole Allbrook, who was killed by drunk driver in a car accident. (Reporter photo/Keith McCoy)

Drunk, distracted driving: PHS students get a dose of reality

PELHAM – Pelham High School students received a sobering message about the dangers of drunk, drugged and distracted driving at an assembly intended to give them a dose of reality.

The PHS auditorium was silent on Thursday, April 6, as a few hundred students listened to parents Guy and Terri Allbrook tell the story of how their daughter Nicole Allbrook died in a drunk driving car accident on Feb. 23, 2013.

“Talking to you all today is our first time telling her story to a group because it just hurts so bad,” Guy Allbrook said. “It’s taken us four years to be able to talk about it. Getting that knock on your door in the middle of the night saying that your child is dead is the worst thing in life that can happen to a parent.”

On the night of her death, Nicole Allbrook, a graduate of Oak Mountain High School, left home to go hang out with friends in downtown Birmingham. When she was ready to go home, she realized that she had lost her keys.

When she couldn’t find her keys, she accepted a ride home from a friend who had been drinking. The car Nicole was in slid off the road and hit a tree. She died instantly.

“He was going 62 in a 30 miles per hour zone with a blood-alcohol level twice the legal limit. The neighbors in the area said it the crash sounded like an explosion. He came out without a scratch. He walked out of the car and straight into prison.

“I’m here to beg to you to just be smart,” Guy Allbrook said. “Make the smart choice of putting a plan together as to how you’re going to get home. Have somebody who you can call to come pick you up. Don’t be the story. Don’t let your parents be up here telling your story.”

At the beginning of the assembly, Shelby County Circuit Court Judge Lara Alvis explained to students that being ignorant of the law and not meaning to do something that hurts others doesn’t absolve them from legal responsibility.

She explained that if a student were involved in a fatal crash while driving intoxicated, that student would be charged with murder.

“If you are over 14 years old that’s an automatic transfer to adult court, and if you’re found guilty you’re going to adult prison,” Alvis said.

If other students played a role in an illegal act, they can be charged with a crime, too, even if they’re not the person who actually committed the crime.

“Your whole life can change in one second, with one bad decision,” Alvis said. “All the time, I see people come into my courtroom who are so young, who make just one bad decision and I can’t give them any special treatment.”