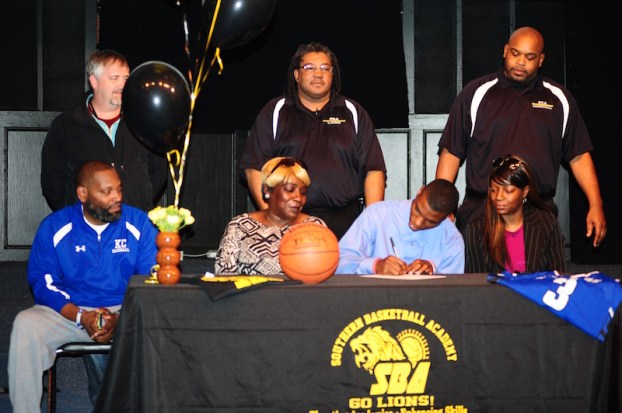 Kingwood basketball player Chase Walker is joined by coaches as well as his mother and grandmother as he signs to play basketball with Southern Basketball Academy in Atlanta, Georgia. (Reporter photo/Alec Etheredge)

Walker was joined by a room full of classmates, family, friends and coaches as he signed on the dotted line to make it official on Friday, April 7. One thing that will help the transition and helped make the decision easier for Walker was founder and head coach at SBA, Danny Davis, who is a former head coach head coach Kingwood.

“It’s not only a pleasure to just be back here at Kingwood today, but to be back here to see one of our own take that next step,” Davis said. “I’ve known Chase for about six years and coached him during travel ball, and was even trying to convince him to come play for me here at Kingwood when I was here, which he eventually did.”

While Davis is happy to be adding an extremely athletic and skilled player to his team, it’s something else that really caught his eye and made him excited for the person he would be coaching in the future.

“The thing I’m most proud of with Chase is that he is actually making the decision and commitment to do something with his life,” Davis said. “He has put himself in the position to be a good citizen and learn things that will benefit him for a long time to come in his life.”

Another coach excited for Walker’s future was his current head coach at Kingwood, Paul Lawrence.

“He’s a true competitor and gave it his all every time he was out there on the court,” Lawerence said. “It didn’t matter if it was practice of the game, he always gave it everything he had. “

And improve he did. Walker led the team with 238 total points this season, which was good enough for an average of 15 points per game. After talking with his coach about improvement and learning things throughout the season, he upped that average to 20 points per game over the final eight games of the season.

Walker also led the team in offensive rebounds, steals and assists showing his versatility and leadership on the floor, always battling for loose balls and keeping his teammates involved.

“I’m obviously really proud to have had him on our team this year and for the way he represented us here at Kingwood,” Lawrence said.

Walker took to the stage with his grandmother and mother to each side of him as he made it official.

“I’m just so thankful for all of the opportunities each of my coaches have given me,” Walker said. “I just love this school man. I just love the positive energy coming out of here. I’m going to miss my senior class, but I’ll definitely make them proud.”

By ALEC ETHEREDGE | Sports Editor A week ago, on March, 30, the Thompson Warriors were within one game of... read more