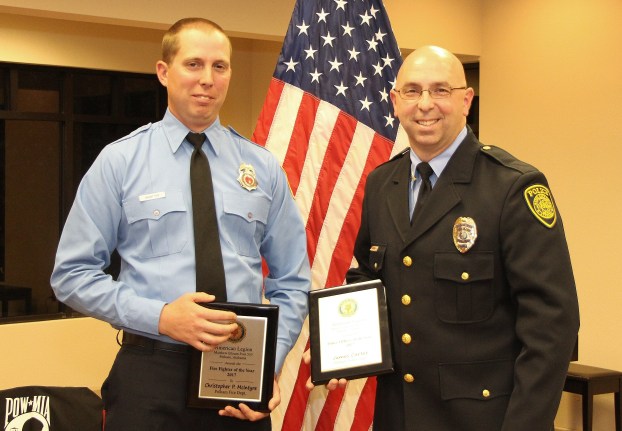 PELHAM – American Legion Matthew Blount Post 555 honored men selected as Police Officer of the Year and Firefighter of the Year at its monthly meeting on Thursday, April 6.

“Today we are setting aside time to honor those people who are still serving,” First Vice Commander Tom McDaniel said. “These people are out at times when we’re normally resting comfortably in our favorite chair or in the our beds.”

Fire Chief Danny Ray introduced Chris McIntyre as Firefighter of the Year. McIntyre started out as a Fire Explorer when he was a child and later became a dispatcher in Center Point. His job as a firefighter was also in Center Point before he was hired as a Pelham firefighter in 2013.

“He quickly became an integral part of our department,” Ray said. “He’s good with computers and he has been responsible for merging some of our software together and linking our fire hydrants to a smart phone system that also allows us to receive dispatch calls on our phones. He’s been a tremendous asset.”

After accepting his award, McIntyre thanked the veterans in attendance at the meeting saying he is only able to do his job because of the sacrifices they’ve made.

“I also want to thank the city of Pelham for hiring me and giving me a chance to make a difference,” he said.

Before announcing Police Officer of the Year, Chief Larry Palmer thanked Post 555 for taking the time to acknowledge public servants.

Palmer said Police Officer of the Year recipient Sgt. James Carter has been an active member of the force for many years.

“He has demonstrated his commitment by being one of the leading fundraisers for our Wings of Hope Fundraiser called No Shave November,” Palmer said. “He is also responsible for training community members on how to respond in natural and man-made disasters and for completing active shooter training with 109 people who work at local businesses.”

Carter said he was honored to represent the police department in such a manner.

“To be recognized by this post is an honor and I’m so thankful for this opportunity,” Carter said.

At the end of the ceremony, McDaniel thanked the families of all Pelham firefighters and police officers.

“I know that without family support it’s difficult to do these types of jobs,” McDaniel said. “Post 555 recognizes what you all do.”