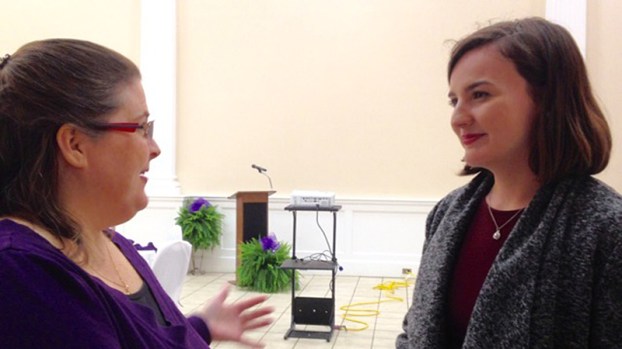 MONTEVALLO – From finding history in quilts to guiding group art therapy, this semester’s Falcon Scholars in Action sought learning outside the classroom while lending their talents to Shelby County’s non-profit agencies.

The FSIA program—a partnership with the Shelby County Commission—is designed to broaden the students’ educational experiences while helping agencies meet staffing needs. The 22 volunteers completing the spring semester were honored April 6 at a dinner in UM’s Montevallo Room.

Amber “AJ” James of Fultondale, majoring in human development and family studies, worked at Family Connection, a group home for troubled children.  “I knew I would be working with at-risk youth, but I came to understand that their behavior sometimes was reflective of their home situation.” James said that she gained insight invaluable for her future career as a marriage and family therapist.

For Nicole Stratton of Helena, also at Family Connection, her degree of involvement came as a pleasant surprise. The Pelham High School graduate is a biology major who found that she really enjoys guiding art therapy. Stratton is an experienced volunteer who logged 150 hours at Children’s Hospital last year.

“I was surprised at how different the children were than what I had thought,” Stratton said.

Meanwhile, Abigail Athey was in juvenile detention.  The social work major from Foley worked with the inmates of the Shelby County Juvenile Detention Center. “I was always interested in criminal justice,” Athey said. “I am from a law enforcement family.”

What she liked best was “spending time with the kids—helping them with  school work or playing basketball. They are just normal kids who ran into a few bumps. They are part of my heart now”  Athey’s next stop is the Jefferson County Public Defender’s Office for an internship starting in August with law school down the road.

Cassie Blair, a history major from Birmingham, found a second home at the Shelby County Museum and Archives.  She delved into the museum’s quilt collection and has organized a quilt show. It was a true fit; Blair wants to be an archivist.

Sometimes the reward is simple joy. Alexia Vasser of Birmingham, a human development and family studies major, worked at the Montevallo Senior Center. “It was so nice to be welcomed by smiles and hugs whenever I showed up,” she said.

Jennifer Payne, a gradate assistant, coordinates the Falcon Scholars program from the UM end.  She works with Shelby County Community Services Manager Reginald Holloway to match students with non-profits and governmental agencies in the county.

In his remarks at the awards dinner, Shelby County Chief Operating Officer Phil Burns spoke about the county commission’s role in helping the UM establish Falcon Scholars in Action. “Programs like this,” Burns said, “help make Shelby County what it is.”