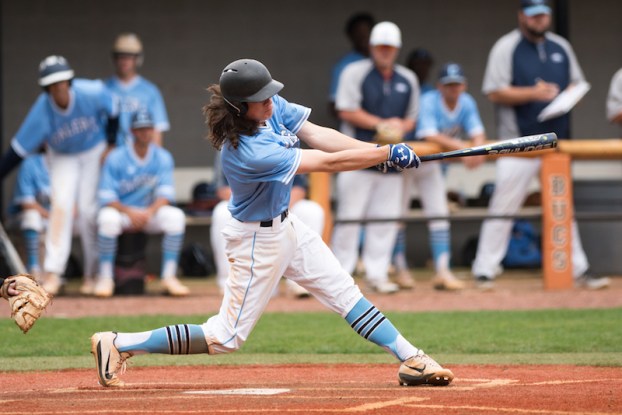 Tyler O’Clair, above, was a big factor, not just at the plate, but also on the mound for Calera in their sweep of Pleasant Grove. (Reporter photo/Keith McCoy)

CALERA – A matchup of 5A top 10 teams took place on Thursday, April 6 as the Calera Eagles played host to the Pleasant Grove Spartans in a doubleheader.

The Eagles went on to sweep the doubleheader thanks to some late inning offensive heroics in game one to win 4-3, and a beautiful pitching performance from Jacob Smith in game two to win 10-0.

Though they weren’t area games, the two wins were a huge confidence boost after an up and down week against some good teams at the Buccaneer Classic in the previous week. It gave them their third consecutive win and improved their record to 19-10 overall as they sit just one win away from the 20-win mark.

Quin Darius Crew was the hero in game one for the Eagles. Trailing 3-1 with two outs in the bottom of the sixth and the bases loaded after three walks, Crew stepped to the plate. Down to his last strike in an 0-2 count, he drove a ground ball to right field that cleared the bases for a 3-RBI single to give Calera a 4-3 lead, which they closed out on the mound in the top of the seventh.

Pleasant Grove took a 3-0 lead in the top of the third thanks to a double that drove in two runs and a dropped third strike that allowed another run. The Spartans held Calera scoreless until the bottom of the fifth where Kevin Dowdell got on board after being hit by a pitch. Dowdell proceeded to steal second before advancing to third on an error, which allowed him to come home on a sac fly one batter later.

The pitching staff locked in over the final four innings, which allowed the Eagles to end the game with four unanswered runs. Crew led Calera at the plate going 2-3 with three RBIs.

There was no need for any late-game heroics in game two of the series as Calera dominated from start to finish outhitting the Spartans 11-2 on their way to an easy 10-0 win.

While the Eagles posted 10 runs in the game, their offense started a lot slower than you might think. Pleasant Grove held them scoreless through the first four innings of the game as things. It didn’t really matter, however, as Calera starting pitcher Jacob Smith was up to his usual ways and throwing a gem.

Finally, in the fifth and sixth inning, the Eagles made their move scoring 10 unanswered runs to end the game an inning short. Coming into the fifth Calera had yet to pick up a hit in the game, but somehow their bats went from ice cold to sticks of magic as they went off for five singles and two doubles to post five of their 10 runs.

They followed that up with four more singles in the bottom of the sixth to post five more runs and end the game with just one out in the inning.

Smith tossed a complete game allowing just two hits and one walk, while striking out 11 total batters to allow his team the chance to battle through their early bat struggles.

At the plate, seven different Calera players picked up a hit including two apiece from Christian Hall, O’Clair, Crew and Ferguson. O’Clair went 2-4 at the plate picking up a game-high three RBIs. Hall and Will Glasscock both picked up doubles, while Hall drove in two runs and scored two as well.

The Eagles, who have clinched a playoff spot thanks to a Jemison loss the other night, will play a big area series with Marbury on Thursday, April 13 and Friday, April 15 to conclude area play.