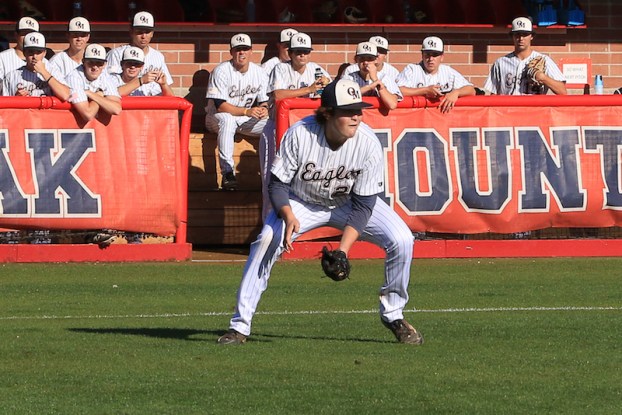 Oak Mountain swept two area games with Mountain Brook over the weekend moving them to 2-0 in area play. (For the Reporter/Dawn Harrison)

MOUNTAIN BROOK – A pair of complete-game pitching performances led No. 5 Oak Mountain to a weekend sweep over No. 15 Mountain Brook in its Class 7A, Area 6 openers April 7-8. Gene Hurst tossed a complete-game shutout for a 7-0 win on Friday, followed by a 7-4 complete-game win by Joe Hartsfield on Saturday.

“(Gene) pitched really well, and I thought Joe was really well again today. That’s kind of where it starts in baseball is on the mound. Those two guys definitely gave us a chance, and I thought we swung the bats well. We had seven runs in each game, and that’s a total that we shoot for, so I’m very pleased with the way we played,” said Oak Mountain coach Derek Irons.

Hurst (6-1) struck out six in his fifth complete game and third shutout of the season. He allowed two hits and one walk. He now leads the Eagles with 50 strikeouts for the season.

After a double play ball got Hurst out of the first inning, Oak Mountain gave him a four-run cushion in the bottom of the first. Garrett DeAraujo, Ethan Holsembeck and John McDonald delivered consecutive singles to load the bases, followed by a Mason Williamson walk and Caleb Floyd RBI single. Spencer Hughes and Logan Sheaffer also collected RBIS in the inning.

McDonald added a ground out RBI in the fifth. Holsembeck (2-for-4) and Williams drove in the Eagles’ last two runs of Game 1 in the fourth.

Holsembeck and Williamson continued their hot bats Saturday at Mountain Brook, each hitting 3-for-4 with an RBI.

“They’ve both been really good all year,” Irons said. “They’ve got a ton of experience, and that’s what you need, those experienced senior leaders to step up in those big games and big moments, get on base and drive runs in, and those two guys have definitely done well for us.”

A one-out single by Holsembeck in the first inning set up an RBI single by Floyd to give the Eagles’ an early lead. Oak Mountain added four runs in the top of the fourth inning, including RBI doubles from Holsembeck and Williamson. DeAraujo and McDonald also knocked in runs.

Mountain Brook scored its first run of the weekend in the bottom of the fourth on error, but the starting pitcher, Hartsfield, helped himself out with a two-RBI single in the top of the fifth.

The Spartans pushed across three runs in the sixth, but Hartsfield retired the home team in order in the seventh for the win. Hartsfield finished the day allowing three earned runs off six hits and three walks, while striking out six through seven innings of work.

“It’ll be a huge series. The good thing is the more you win, the bigger the next game becomes. We’re both sitting at 2-0 in the area, so obviously it’ll be a very important series, and they’ve got a really good team. They’ve been a very good program for a long time.”