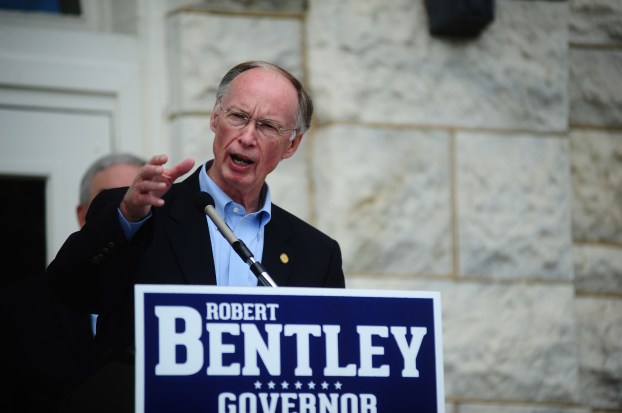 Alabama Gov. Robert Bentley, a Columbiana native, has resigned from office amid allegations he used state resources in an effort to cover up an affair with one of his former political advisors. (File)

MONTGOMERY – Alabama Gov. Robert Bentley, a Columbiana native, has resigned from office amid allegations he used state property in attempt to hide an affair with one of his former advisors.

Bentley’s resignation came a few days after the Alabama House of Representatives Judiciary Committee released a report claiming Bentley had an affair with then-chief advisor Rebekah Mason while Bentley was governor, and used state resources and staff members in an attempt to cover up the affair.

On the afternoon of April 10, Bentley pleaded guilty to one misdemeanor charge of knowingly converting campaign contributions to personal use and one misdemeanor count of failure to properly file campaign finance records. His bond was set at a total of $600.

As a result of the guilty pleas, Bentley must pay a total of $7,000 in fines, repay $8,912 in reimbursement to his campaign fund, surrender nearly $37,000 in campaign funds to the state, complete 100 hours of community service. The agreement required Bentley to resign from office and to never seek or hold political office again in Alabama.

Bentley, who was born in the Shelby County community of Joinertown near Columbiana in 1943, had been serving as governor of Alabama since he was elected to the office in 2010.

Bentley announced his resignation at a press conference that began shortly after 5 p.m. on April 10.

Bentley apologized for mistakes but did not offer details.

“I’ve not always made the right choices,” he said in comments directed to his staff and Alabama residents. “There have been times I have let you and our people down, and I’m sorry for that. I can no longer let my staff be subjected to consequences my past actions have brought on them.”

Bentley said he would seek “new ways to serve the good people of our great state.”

“I love our people will all of our heart, and I want nothing more than to serve them,” he said. “I’m leaving this office…to focus on other and possibly more effective areas of service.”

Bentley said he was committed to ensuring a “positive and peaceful transition of power” to Lt. Gov. Kay Ivey, who moves into the state’s top governmental seat.

The Judiciary Committee report was prepared by Jack Sharman of the Lightfoot, Franklin and White law firm, who acted as special counsel for the Judiciary Committee. While preparing the report, Sharman and his staff interviewed more than 20 witnesses, “many of whom are current and former law enforcement officers and public servants,” and reviewed more than 10,000 pages of documents.

The report claimed Bentley and Mason were uncooperative with the investigation.

“Although many witnesses have been candid and forthcoming, Governor Bentley and his associates, including Rebekah Mason, refused to cooperate in any meaningful sense and, indeed, obstructed this investigation,” read the report. “Governor Bentley directed law enforcement to advance his personal interests and, in a process characterized by increasing obsession and paranoia, subjected career law enforcement officers to tasks intended to protect his reputation.”

The report claims “Bentley’s loyalty shifted from the state of Alabama to himself” after his ex wife, Dianne, found out about the affair.

In an effort to conceal the affair, Bentley allegedly directed state law enforcement officers to “end his relationship with Mason on his behalf,” drive to Tuscaloosa and Greenville to seek out recordings of Bentley’s conversations with Mason and “investigate who had a copy of the recordings and identify potential crimes with which they could be charged.”

“To ensure the silence of his staff, Governor Bentley encouraged an atmosphere of intimidation,” the report read.

“Today a long and sad chapter in Alabama’s history has come to an end. I am glad that state government can now turn our attention to some of the more pressing issues before us,” state Sen. Cam Ward, R-Alabaster, wrote in a statement. “As a state, we must now focus on moving forward to repair the damage that has been done to our state’s image. I look forward to working with Governor Ivey and her staff to make economic development and job growth a top priority for Alabama again.”

“Today, Robert Bentley finally did the right thing and resigned as Governor,” Rep. Matt Fridy, R-Montevallo, wrote in a statement. “This had been a difficult and embarrassing chapter in Alabama’s history, and I am glad it is coming to an end. I look forward to working with Governor Ivey in the days and months to come to move the State forward. As always, I and the rest of the Shelby County delegation will continue to fight for the people of Shelby County to advance our local economy and our quality of life.”

“I believe Robert Bentley resigning as Governor of Alabama was the appropriate decision,” U.S. Rep. Gary Palmer wrote in a statement. “The people of Alabama deserve a leader who is above reproach and governs our great state without distractions. This action is the first step to allow the people of Alabama to finally move on from this situation.”

“While we are deeply saddened by these circumstances, the Alabama Republican Party holds their elected officials accountable and demands the utmost integrity of office holders,” read the statement. “The overwhelming majority of elected officials are good, hard working people who love their communities, state and nation. However, when situations arise that are in direct conflict with the betterment of our people, we will speak up regardless of political party.”

CHELSEA- Several events were held on Friday, April 7 and Saturday, April 8 to celebrate the grand openings of two... read more