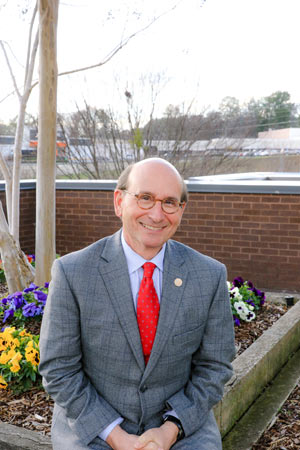 It’s hard to believe Hoover, with its close to 90,000 residents, only had 403 people when it was incorporated in 1967. During that span, the city has welcomed the Galleria, countless businesses, baseball teams and much more. But according to some of the city’s top officials, the next 50 years could be even better.

One of the biggest city projects underway is the new sports complex. It will have its first indoor phase finished this May, with everything open in May 2018.

“We are very excited about the new Hoover Met Complex and the Finley Center,” says Hoover Mayor Frank Brocato. “This facility will be a multi-use destination for sports, events, banquet, meetings, tradeshows, parties and more. I am thrilled to see such progress being made at the Met Complex.”

Once completed, the complex will be home to the Hoover Met Stadium, outdoor fields and courts, the Finley Center and the Hoover RV Park.

“That thing’s going to be amazing,” says Bill Powell, executive director of the Hoover Area Chamber of Commerce.

And there’s even more in the works for the city. Brocato says he plans to hire an urban planner to oversee the growth during the next 50 years. Some future plans include more parks, a bicycle master plan and creating a Leadership Hoover program that will help young people develop into leaders.

Another group dedicated to building a community of leaders is the Hoover Chamber of Commerce. The Chamber was formed 11 years after the city, so they will be celebrating their 40th anniversary next year.

“We’re growing a lot, about 20 to 25 new members a month — a lot of small businesses,” says Powell, who has been with the Chamber for 22 years.

And people can get to know those businesses during Celebrate Hoover Day, which is free and will be April 29 from 11 a.m. to 3 p.m. (or April 30 if it rains) at Veterans Park on Valleydale.

Parents can also have their children fingerprinted and photographed during the event by the Hoover Police Department.

“We hope they never need to use these fingerprints, but we think it’s important to be proactive,” says Hoover Police Chief Nick Derzis.

There will be plenty of things for all ages to enjoy at Celebrate Hoover Day.

“It’s just a really nice day for the community to get together,” says Erin Colbaugh, events coordinator for the city of Hoover. “It’s a fun time to come out to the park and celebrate Hoover’s 50th anniversary.”

Just like how this event has expanded each year, so has the city and the departments committed to protecting it.

“Hoover is going to continue to grow and populate,” says City of Hoover Fire Chief John Wingate. “There are 200,000 people here at any given time. The fire department has laid the ground work over the years to be able to handle what we have right now.”

That includes opening Station 10 in Ross Bridge in 2016, and Wingate expects they will need more fire stations in the future to keep up with the growing city.

Wingate, who has lived in Hoover his whole life, has experienced that growth first hand. He remembers the Hoover Mall and also the annexation of Riverchase and Bluff Park.

“I think the city is still a great place to live and work,” he says.

Helping to keep it that way is also the Hoover Police Department. Residents can expect to see changes with the station as it undergoes upgrades with its technology, including its 911 capabilities that will be finished by August. Once completed, the department will be able to receive text messages and videos with the 911 system, Derzis says.

They’re also having their phones upgraded so their call history lasts a day, instead of a few hours. It will go from analog to digital technology and extend their coverage to the entire state.

He predicts the department will continue to grow — creating new opportunities for people who want to join and advance.

Growth has also proved important for Hoover schools, as rezoning has been a big topic of discussion.

“It’s really critical to our school district,” says Dr. Kathy Murphy, Hoover City Schools superintendent. “We want to get students where they will be best served. We’re most hopeful that our students will be as close to a community school as possible.”

Although Hoover is already known for its high-quality school system, Murphy thinks there’s still so much more possible.

“We are a very good school district, but I think we have the potential to become a great school district,” Murphy says. “I just anticipate us getting better and better with time.”

And that sentiment is true for Hoover. It’s only going to get better.