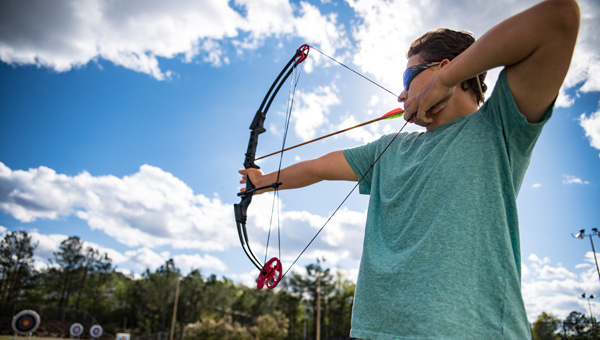 HOOVER– Hoover’s city archery program, one of the few of its kind in the area, is growing rapidly and producing noteworthy accomplishments.

Toni Leo started an archery program in 2012 at Bumpus Middle School, during her final year at the school before retirement.

Leo knew Hoover Parks and Recreation officials and after her retirement was asked to start an archery program for the city as a contract employee.

Archery was made part of the city’s summer day camp then into its own program.

Leo said she had taught archery for years in schools.

“I’ve always loved it,” she said. “[Starting a city program] just seemed like a natural thing to do.”

Leo, who is certified through the Junior Olympic Archery Development program, has gone into schools to promote the activity, and the popular “Hunger Games” book and movie series, with its female, bow-wielding protagonist, also spurred interest in archery.

The city’s program has grown from about 10 people to 27.

“It takes a special kind of mentality,” she said and touted archery’s facilitation of stress relief, relaxation and camaraderie. “It’s a lifetime sport.”

Classes are held at 4 p.m. and 5 p.m. every Tuesday and Thursday, with scored competitions at the end of each month.

A class for beginners is held once a month, but there is a waiting list for people interested in starting the program.

Classes are held outdoors at Sertoma Park adjacent to Green Valley Elementary School from April through October and indoors at Hoover Tactical Firearms during cooler months.

Participants range in age from the minimum of 8 years old to adults, and come from locations including Gardendale and Pell City.

Leo said Hoover’s program is rare. Cullman has an archery program, and Oak Mountain State Park has a range but no professional instructor.

Participation costs $45 a month and includes eight hours of instruction plus use of city-owned bows, arrows and targets, if needed.

Safety is stressed with all archers, and steps to ensure safety are taught and mandated.

Anyone interested in participating should contact Dee Nance with the Hoover Parks and Recreation Department at nanced@ci.hoover.al.us or 444-7765.

There are several different kinds of bows used, from simple bare bows to Olympic recurve and compound.

Scores are determined by an arrow’s proximity to the center of the target, and archers compete against a rubric to earn pins.

Pins become increasingly difficult to earn as the targets are moved farther back and more points are needed.

“The first couple of pins are very achievable, they’re feeling good about themselves, and then reality sets in,” Leo said about the JOAD program.

Jacob Martin is one of the regular participants.

Martin said he started archery because his younger brothers were interested a couple of years ago and he did not want to be sitting around with nothing to do.

Martin, 16, has earned several pins and is working on his gold pin—the highest possible level—in barebow.

“I hope to have gold by the end of the month,” he said.

Martin has also achieved Learners Level 1 instructor certification, meaning he can work under a Level 2 coach such as Leo, and he hopes to one day become Level 2 himself and teacher others.

By NEAL WAGNER / Managing Editor Shelby County is home to two of the largest public high schools in the... read more