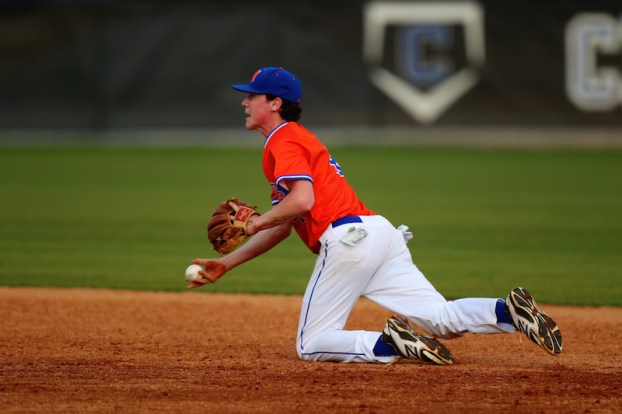 The Montevallo Bulldogs picked up a sweep over Southside-Selma last week to improve their area record to 3-1 with one area series left on the season. (For the Reporter/Cari Dean)

If there were any questions about how bad the Montevallo Bulldogs’ baseball team wants to win Class 3A Area 5 and make the playoffs for a second year in a row, they were answered this past week in a series with area opponent Southside Selma.

With the first two games of the series counting toward their area record, the Bulldogs improved their record in that category to 3-1 this season with one series left as they look to head back to the playoffs.

Montevallo dominated the Panthers in game one, outhitting Southside 10-1 which led a 14-3 rout in the scoring column. The Bulldogs put up four runs in three of the shortened five innings and were held scoreless in just one of the five innings.

A big reason for Montevallo’s success was the tremendous offensive firepower Jackson Hughes gave the Bulldogs at the plate. Hughes went 4-4 with two doubles, three RBIs and four runs scored. Nick Thompson and JD Birdsong also had an impressive game at the plate as each went 2-4 with three RBIs. Birdsong legged out one double and scored four runs in the game, while Thompson’s speed led to him rounding out a triple and scoring one run.

Another helping factor was the base running clinic put on by Montevallo. The Bulldogs swiped six stolen bases after attempting to steal seven times. DaQwan Bryant (2), Baxley Shores (2), Taylor Hall and Birdsong were responsible for that impressive feat.

While their offense was pertinent to their win in game one, what Thompson did on the mound was just as important if not more. The senior pitcher tossed a five-inning complete game allowing just one hit and no earned runs while striking out eight batters.

Game two featured another offensive outburst from the Bulldogs as they scored at least one run in all six innings of yet another run-rule win over the Panthers.

Montevallo used 11 hits to score 15 runs as they outscored Southside 15-5 to pick up their third area win of the season. While the Panthers’ offense was able to tie the game at three in the top of the second, they were only able to put up two more runs the rest of the way as the Bulldogs outscored them 12-2 over the final four-and-a-half innings.

Three Montevallo players picked up multiple hits in the game, including an impressive three hits from two different players. Birdsong went 3-5 at the plate with three RBIs and three runs scored. Ahmad Edwards also went 3-5 with two RBIs and two runs scored in the game. Zac Oden led the team with four RBIs after going 2-5 at the plate. They also added eight more stolen bases in the game, including three from Edwards and Parker Hamby.

Adam Burnett got the start on the mound and went five innings allowing four earned runs and five hits while striking out six.

While game three had no bearing on the area standings, Montevallo kept their intensity level high and finished the series with their most dominant performance in a 15-0 shutout win to complete the sweep.

While they picked up six more hits and 15 runs, it was Birdsong on the mound that was the star of this game as he picked up a four-inning no-hitter in the complete game shutout of the Panthers.

In all, they swiped 29 stolen bases and 27 hits in their three wins over the Panthers. They have now stolen an incredible 100 bases this season.