PELHAM – The Pelham Police Department arrested a Georgia man on April 8 on charges of first-degree receiving stolen property and three counts of fraud. 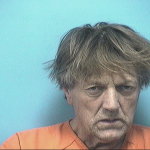 Randall Irwin Henderson, 62, of Cartersville, Georgia, is being held in the Shelby County Jail after he allegedly received a 2003 GMC Sierra worth $10,000 “knowing that it was stolen or having reasonable grounds to believe it had been stolen and not having the intent to restore it to its owner,” according to court documents.

According to court documents, while at or near Country Grocery, located on Shelby County 52, Henderson was allegedly in illegal possession of a Lowe’s credit card, a South Crest Bank debit card and a Region debit card, which brought on the three counts of fraud.

Henderson is being held on bonds totaling $25,000. His case has been assigned to Shelby County District Court Judge Daniel Crowson.