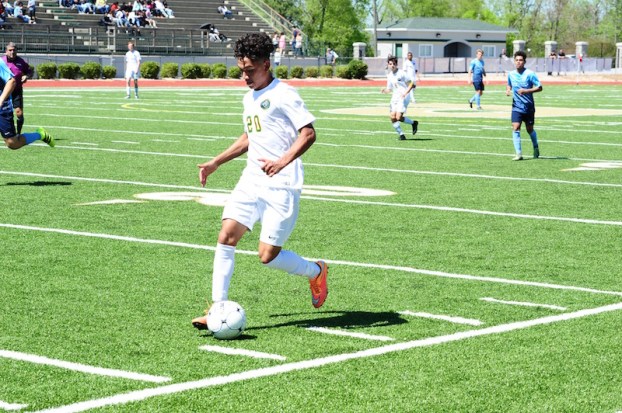 The Pelham Panthers are still atop the 6A rankings after winning four of their last five games before the rankings were released. (Reporter photo/Alec Etheredge)

After a spring break hiatus, the eurosportscoreboard.com soccer coaches poll is back and features a strong slate of county teams. The boys’ side of the rankings has been strong all season long featuring no less than seven teams, which was the case this week.

To build off of the strong core of teams in the top 10, a team from Shelby County found the No. 1 overall spot in all but one classification’s four top 10 polls.

Starting in 7A, the Oak Mountain Eagles still sit atop the standings as they have this entire season. Since their return from spring break, the Eagles have gone 2-0-1, outscoring opponents 11-2. One of those wins was a 5-1 win over Daphne, but the more important of the two was against area rival Spain park, who they beat for the second time this season 6-1. That win gave Oak Mountain a 3-1 record in area play as they sit atop the Area 6 standings with No. 2 Mountain Brook.

Despite their struggles with the Eagles this season, it has been an impressive year for Spain Park. They hold an overall record of 11-6-1 and have gone 3-1-1 in their last four games, which was good enough for the No. 7 spot in the latest rankings. With an area record of 1-2, however, the Jags are currently sitting on the outside looking when it comes to the 2017 postseason.

Coming in at No. 9 in the 7A standings were the Thompson Warriors, who have jumped one spot since the last rankings were released before spring break. The reason? The Warriors have won both their starts since then taking down Helena 6-4 and Gadsden City 6-0 to improve their record to 9-5-2. They, like Spain Park, are sitting on the outside looking in with an area record of 1-2, making their last three area games of the season very important.

As we jump down a classification to the 6A ranks, you’ll find the county’s next No. 1 team in the Pelham Panthers. This marks the second consecutive week the Panthers have been atop the standings. Despite losing a 1-0 lead late to Spain Park last week, Pelham has won two in a row since then and four of their last five games to improve to 12-5-1 on the season. The Panthers can clinch a playoff spot with one more area win.

Not much changed in the 5A top 10 as the Briarwood Lions remain the only team from the county ranked and in the same No. 6 position they were in the previous rankings. The Lions have gone 3-0-1 in their last four games and have already clinched a playoff spot with a 3-0 area record.

The biggest change in the rankings came in the 1A-3A Classification. We find the county’s third No. 1 team, but maybe not the one you expected after Indian Springs leapfrogged over Westminster School at Oak Mountain to take the top spot.

Springs’ has gone 6-0-2 in their last eight games as they haven’t lost a game since March 1. Sitting a 13-2-3 overall, both of their losses this season have come by one goal. They currently sit at 3-0 with three area games remaining this season.

Westminster may have fallen from the throne, but they are still sitting pretty with an overall record of 12-2-2 and an area record of 4-0. The Knights have gone 2-0-1 since spring break and 3-1-1 in their last five games as they continue to impress.

By ALEC ETHEREDGE | Sports Editor Spring break has come and gone meaning soccer is back after a one-week hiatus... read more