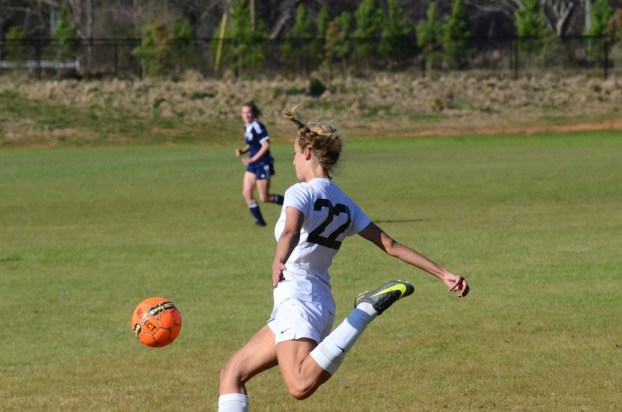 The Westminster School at Oak Mountain girls’ soccer team moved up to No. 1 in the latest soccer rankings as they are the only No. 1 girls team from the county. (Reporter photo/Alec Etheredge)

With seven of the 11 AHSAA girls’ soccer teams ranked in their respective top 10, including one as the No. 1 team, it’s safe to say the county’s dominance of girls soccer continues to make noise around the state.

The most recent rankings come after a week-long pause do to spring break and feature all three 7A teams as well as a No. 1 team in the 1A-3A Classification.

Not many changes happened in the 7A ranks as Oak Mountain and Spain Park held steady at No. 3 and No. 4, respectively, and Thompson fell one spot from No. 7 to No. 8.

The Eagles are now 12-2-2 overall and 3-0 in area play having gone 1-0-1 in their two games since spring break. They are 5-1-1 over their past seven games and have a tough schedule ahead of them, but should have no problem finishing out area play and making the 2017 postseason.

Spain Park has played much since spring break came to a close splitting a pair of games with Prattville and Hoover, beating the Lions 3-0 and falling to the Bucs 3-1. Before the break they had won six in a row before losing to Oak Mountain 6-0 to end the win streak. The Jags currently hold an overall record of 9-3-1 and sit at 1-1 in area play.

Losing five of their last six games, the Thompson Warriors are on a bit of a downward trend. They started the season 8-0-1 showing they have the talent to compete. Five of their eight losses are by two goals or less, which means they are in just about every game. With three area games left and a 1-2 record, they pretty much have to win all three as the time to turn those close games from losses to wins is now.

Moving down to 6A, the Chelsea Hornets jumped up one spot from No. 5 to No. 4 and for good reason. The Hornets have won two in a row since spring break ended and have won four consecutive games dating back to March 21 outscoring opponents 26-1 in that timespan. They are 9-6-2 overall and 3-0 in area play with just one area game remaining, meaning they have clinched a playoff spot.

The Briarwood Christian School Lions came in as the second highest ranked team in their respective classification as they moved up to a season-high No. 2 ranking in the 5A top 10. The Lions have won three in a row and gone 5-1-1 in their last seven games.

As we continue down to the 1A-3A division, we find the county’s only No. 1 team in the girls’ rankings as the Westminster at Oak Mountain Knights made the leap from No. 2 to No. 1. The Knights have won two consecutive games over Indian Springs and Holy Spirit. They now have an overall record of 8-3 after a strong 5-0 start to the season.

Slipping down just two spots behind them and hot on their trail is Indian Springs, who was on fire before spring break winning four straight games and five of six. Since the break has come to an end, Springs has gone 0-1-1 preventing a further climb up the rankings.

By ALEC ETHEREDGE | Sports Editor After a spring break hiatus, the eurosportscoreboard.com soccer coaches poll is back and features... read more