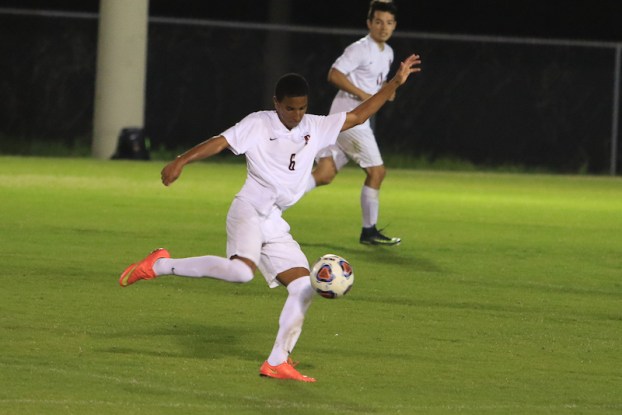 Oak Mountain was able to take down No. 2 Mountain Brook to clinch a playoff spot on Monday, April 10, thanks to three first-half goals. (For the Reporter/Dawn Harrison)

MOUNTAIN BROOK – While it was free taco night for all Mountain Brook students in attendance, scoring for the Spartans was a little more difficult to come by as the Oak Mountain Eagles were able to pull off a 4-2 win on the road in a one versus two matchup on Monday, April 10.

Coming into the game, both teams were 3-1 in area play and sitting at No. 1 and No. 2 in the 7A rankings. A win for the No. 1 Eagles means they take control of Class 7A Area 6 with a 4-1 record, while the Spartans allowed Spain Park back into the thick of things as they moved to 3-2 in the daunting area.

On March 23, the Eagles fell to Mountain Brook in a tough 3-2 loss at home to hand them their first and only area loss of the season, which set up a nice chance at redemption on Monday night as they looked to clinch a berth in the 2017 playoffs.

“That first game was a really good game and they played with a little more emotion and hustled than we did,” Oak Mountain head coach Dan DeMasters said. “It hurt even more for it to happen on our home field, so before spring break we had a little talk about how we have to come back and perform after the break.”

The Eagles came out with that thought of three weeks ago still on their mind and played with a little extra passion early on leading to the first goal of the night.

After stringing together six or seven passes downfield, Kennedy Davis was able to set up right in front of the net and tap in an easy goal in the first seven minutes of the game to put Oak Mountain up 1-0.

Less than nine minutes later, the Eagles’ early success continued as Clay Holstad was able to find a deflection off of a Mountain Brook defender that he sent easily into the box where Victor Perez cleaned up a rebound off of the goalkeeper’s hands to put Oak Mountain up 2-0.

The 2-0 lead by no means meant they were about to let up as they were able to put in their third goal of the half less than three minutes later. Holstad was able to clean up another broken play, this time a corner, as he sent the ball over to Perez who headed it Davis’ way for another easy look and a 3-0 lead.

“One of our main goals is to score first in the game because if you can score first you can play the game you want to play. Then to score the second and third goal first, that really made our guys less tense and nervous,” DeMasters said of the strong start.

Over the final 25 minutes of the half neither team threatened to score as both defenses locked down, leading to a 3-0 Oak Mountain lead at the break.

All it took was 19 seconds in the second half for the Spartans to wake up and put home their first goal as they were able to cut the lead to 3-1.

“They came out and scored in the first 20 seconds of the second half, which is the kind of team they are meaning we couldn’t let up whatsoever,” DeMasters said.

Oak Mounatin, however, wasn’t ready to end their scoring or let Mountain Brook get the idea of a comeback in its head as Caleb Van Geffen struck a nice shot nine minutes into the half to extend the Eagles’ lead to 4-1.

The rest of the game was somewhat quiet before Mountain Brook put home a PK with less than a minute to play to configure the final score of 4-2.

Oak Mountain moved to 13-3-3 overall and 4-1 in area play as they clinched at least a second place finish in the area, which means they are playoff bound.

“Right now with the playoffs set our mentality is to get prepared for that so we will give a lot of rest and make sure we are ready for the postseason, but that being said we still have a lot of expectation for guys if they want to play,” DeMasters said. The seniors definitely don’t want to take their foot off the gas because it’s important to carry momentum into the playoffs.”

By ALEC ETHEREDGE | Sports Editor PELHAM – It has been an unconventional up and down season for the Pelham... read more