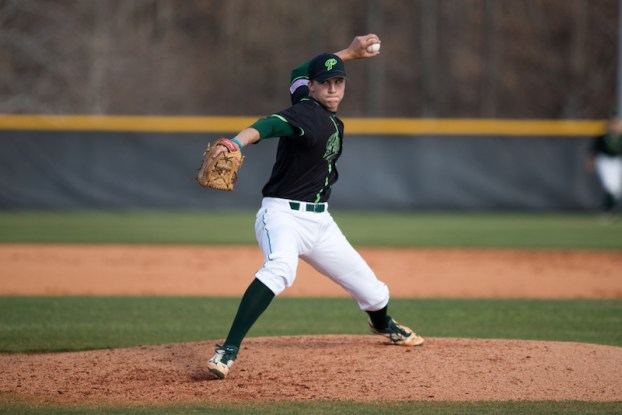 Pelham was able to upset No. 7 Oxford on Monday, April 10 by a final score of 3-2 thanks to some strong pitching. (Reporter photo/Keith McCoy)

PELHAM – It has been an unconventional up and down season for the Pelham Panthers’ baseball squad and with hopes of making the playoffs now having squandered out of their fingertips, it could have been easy for the Panthers to put up their gear and mail it in.

But that’s not what the storied Pelham baseball program has ever been about nor would that be the way this team would end their season as they continued to push forward and fight in a 3-2 upset of 6A No. 7 Oxford on Monday, April 10.

After grabbing a 2-0 lead in the bottom of the first, the Panthers were able to hang on down the stretch for a 3-2 win despite being outhit 8-4.

Cody Ferguson got the start on the mound for Pelham and went a strong five innings allowing six hits, two walks and one earned run, while striking out three batters.

As mentioned, the Panthers got things started in the bottom of the first thanks to a leadoff single by Tyler Wages. His single was followed by a walk and an error that brought in Pelham’s first run of the contest, while also advancing Garrett Stonicher to third with no outs.

John Michael Long grounded into a double play during the next at bat to put two outs on the board, but that’s all he needed to do to score Stonicher from third as the Panthers took a 2-0 lead.

Oxford put their first run on the board in the top of the fourth thanks to a Pelham error and an RBI double to center field to cut the lead to 2-1.

The Panthers, however, wasted no time responding with a run of their own in the bottom half of the inning. Kasey Clark and Mitchell Rottier started the inning with a walk and single before Chris Williams hit a sac fly to center field to score Clark and give Pelham a 3-1 lead.

Oxford was able to put together their second one-run inning in a row during the top of the fifth after a walk in the second at bat was followed by a triple from Nathan Lloyd to bring the Yellow Jackets within one at 3-2.

After clawing back into the game, Hunter Motes came in to close the game out on the mound for the Panthers to prevent losing the lead, and he did exactly what he needed to do allowing just two hits and no runs over the final two innings of play as Pelham held on for the 3-2 win.

Four different Pelham players picked up a hit in the game, while two of them came across the plate to score a run. Stonicher went 0-1, but was able to reach on two walks. Williams picked up the Panthers’ only RBI with his sac fly. The win moved Pelham to 10-15 this season.