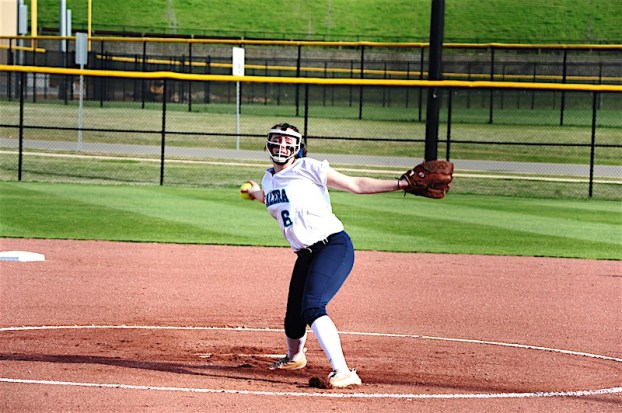 Ashlynn Hamm had a great game both in the circle and at the plate throwing a complete-game shutout and going 2-3 with an RBI. (Reporter photo/Alec Etheredge)

On Tuesday, April 11, the two met at Calera’s new sports complex as the Eagles hosted the Lions in an out-of-area softball game. While it has been an up and down season for the Eagles through their first 20 games, their 21st game of the season couldn’t have gone any better as they took down Briarwood 3-0 to defend their home turf.

They combined eight hits and three runs on the offensive side with no runs and three hits on the defensive side. While Calera’s offense may have been steady the entire game putting up one run in the second, fourth and fifth inning, it was Ashlynn Hamm in the circle that shined a little brighter than everybody in the win.

Hamm threw 81 pitches in a complete-game shutout that featured four strikeouts and just three hits as she had the Briarwood batters grasping for any sort of hit all night.

After a quiet bottom of the first, the Eagles were able to make a little bit more noise in the bottom of the second. Madison White was hit by a pitch to add the first baserunner of the inning with one out. Payton McDonald followed that with a single to left field to put runners on first and second.

With two outs in the inning, Regan Barr hit a ground ball to third base that should have been the third out of the inning, but she was able to reach on a fielding error, which also allowed White to score from second for Calera’s first run of the game.

With Hamm preserving the 1-0 lead, it made Calera a lot more relaxed and patient at the plate. Despite another quiet inning in the bottom of the third, they came back with their second one-run inning of the game the following inning.

Hamm helped out her own cause by doubling on a deep fly ball to left field. Lauren Bailey came in as a courtesy runner for the pitcher and moved over to second immediately on a sacrifice bunt from White. McDonald followed with her second single of the game, this time it had an RBI attached as Bailey was able to come home to put Calera up 2-0.

The Eagles didn’t take an inning gap this time as they came right back in the bottom of the fifth with their most productive inning. Charley Clark led the inning off with a line drive to left field that she was able to leg out for a triple thanks to her speed. Unfortunately for Calera, she was thrown out at home during the next at bat trying to score on a sac fly, but instead getting caught on the wrong end of a double play.

With two outs in the inning, the Eagles showed no panic and strung together a walk and back-to-back singles to bring home their third and final run of the game. Hamm was able to get Briarwood to go 1-2-3 in the top of the sixth and seventh to close out the 3-0 win.

Hamm and McDonald led the way at the plate going 2-3 with one RBI. Nicole Harrelson also had a nice game going 2-2 with a walk and one run scored.

By ALEC ETHEREDGE | Sports Editor  The Thompson softball squad is starting to look like the team of old. A... read more