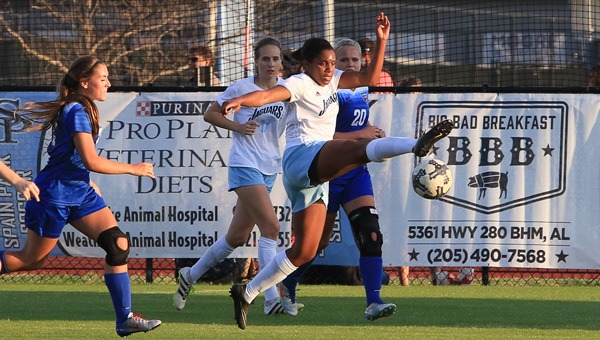 Spain Park senior Madison Cobb tries to control the ball during a loss to Vestavia Hills on Tuesday, April 11. (FOR THE REPORTER/DAWN HARRISON)

Visiting Vestavia (14-1-3) took a 2-0 lead into halftime, added a third goal early in the second half and held on.

Scoring for the Rebels in the first half were junior Katherine Savage and Taylor Korn, on an assist from junior Faith Hauberg.

With 36:10 on the clock in the second half, junior Caroline Silvio scored to make the score 3-0.

Fifth-ranked Spain Park (9-4-1, 1-1 in area play) had several scoring opportunities in the game but could not convert on enough of them, coach Robert Starr said.

“We had a few opportunities that if we just get it in, it changes the game a little bit,” Starr said.

A corner kick by junior Mia Bradley was headed by sophomore Jasmine Green just to the right of the goal a few minutes after Vestavia’s last goal.

Then, three minutes later, a free kick by Bradley from just outside the box also sailed wide right.

Vestavia’s goalkeeper made a save on a Green shot to prevent a goal, but Green and the Jaguars broke through with 16:07 remaining in the game.

Green scored after intercepting a pass, keeping her balance after the collision with a Vestavia defender then breaking away and shooting past the keeper.

Green had another breakaway opportunity later in the game, but the keeper was able to get a hand on the ball and push it past the goal.

Among the Jags to take the field on April 11 were four freshmen and four sophomores.

SPHS hosts area foe Huffman at 5 p.m. on Wednesday, April 12, before a non-area home game against Gardendale at 7 p.m. on Thursday, April 13.

The Jaguars will then rest before returning to area play at home against Oak Mountain at 6 p.m. on April 18.