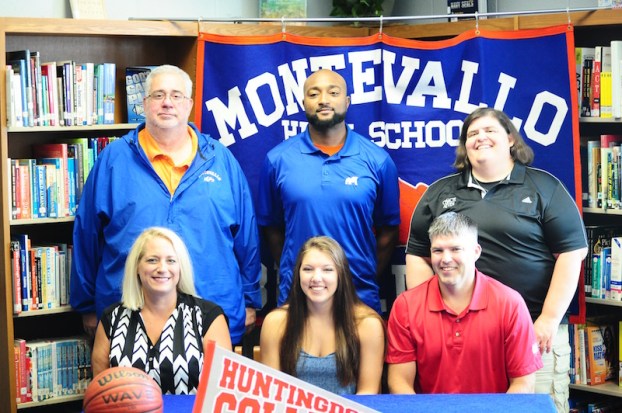 Hannah is joined by her parents as well as coach Niven, right, and boys head coach Greg Dickinson, middle, after signing her letter of intent to attend Huntingdon College. (Reporter photo/Alec Etheredge)

MONTEVALLO ­– It’s been a strong run for Emri Hannah at Montevallo High School as she has led the Lady Bulldogs’ basketball team to much success over the last couple of years, but now that run has come to an end as she hangs up the Montevallo orange and blue for the next step in her life.

That next step will come in the way of red and grey as she heads to Montgomery to further her athletic and academic career at Huntingdon College where she will continue to be a part of the women’s basketball program.

Her head coach at Montevallo, Tena Niven, will tell you that what Hannah has learned with the Bulldogs and what she has done for them will transfer over to the Hawks’ program as well.

“Her work ethic is what is so impressive,” Niven said. “We really have to run her out of the gym and say ‘enough is enough,’ otherwise she would run herself into the ground if we didn’t make her get out of there.”

There’s never a day that Hannah didn’t give it her all during her time at Montevallo, which helped her score 185 points, make 32 3-pointers, grab 97 rebounds and take away 40 steals during her senior campaign.

Her breakout game came in a big area game with Southside Selma this season where she went off for 24 points after shooting an impressive 6-9 from beyond the arc.

“When we first got her, her shot was terrible and she couldn’t handle the ball,” Niven said. “Now as a senior, she was very comfortable handling the ball and in pressure situations we weren’t afraid of her handling the ball, we wanted it in her hands and that’s all because of the work she put in over the years.”

A lot of that improvement is thanks to the boys head coach Greg Dickinson, who really took her under his wing and helped her work hard at her game.

“Coach D really worked with her and that’s a testament to their relationship and passion for her becoming a better player,” Niven said. “A lot of time they get tired of hearing my voice, so you have somebody young like Coach D come in and he has that extra energy that gets them to work harder and harder.”

One thing that didn’t need any extra training was her leadership on and off the court as she was always did whatever she could to help her team.

“Her leadership went above and beyond,” Niven said. “If there was something others didn’t want to do she stepped up and did it whether its washing uniforms or picking up trash off the bus, whatever it is, she sets an example of others.”

Her tenure at Montevallo saw a trip to the Elite 8 during her junior season and a ton of success in area play over the last couple of years. She will now take on all of that great success and tremendous leadership skills to the next level.

By ALEC ETHEREDGE | Sports Editor CHELSEA – Despite being on the road at Chelsea on Tuesday, April 11, the... read more