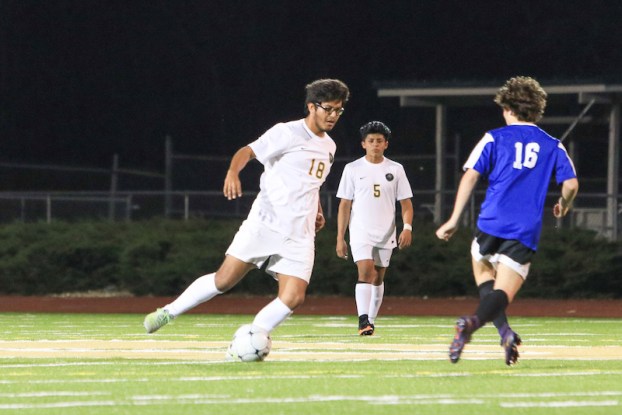 Pelham’s Yunior Tejada put home two goals for the Panthers in their 5-0 win over Chelsea to clinch a playoff spot for his team. (For the Reporter/Dawn Harrison)

CHELSEA – Despite being on the road at Chelsea on Tuesday, April 11, the Pelham Panthers’ boys soccer team looked like the No. 1 team as they took down the Hornets in a very big area matchup between the two teams.

While Pelham is the No. 1 team in Class 6A and looking very much like it having won four of its last five games heading into this one, Chelsea is going in the other direction.

The Hornets are 2-2 in their last four games and had to win to keep their playoff hopes alive, but unfortunately that wasn’t in their destiny. Pelham dominated the game from start to finish putting up four goals in the first half to take a 4-0 lead before holding on to win 5-0.

Chelsea moved to 0-3 in area play, while Pelham went to 3-0. With just one area game left for each team, the worst Pelham can do is finish 3-1 and second in the area, which means the Panthers have clinched their spot in the 2017 playoffs.

Pelham came out on a mission early on, mainly thanks to Yunior Tejada who had several good looks early in the game and put the Panthers first goal of the game home less than 10 minutes into the action thanks to an extremely far out shot that slipped between the goalkeeper’s legs.

Eight minutes later, Tejada put home his second goal from about 20 yards out as he sent a screaming shot right into the back of the net to give Pelham an early 2-0 lead.

There were a couple of good looks from the Panthers over the next 10-15 minutes of play, but nothing was able to get in the goal.

With about three minutes left in the half, that changed as Miguel Ceron had a header bounce around in the box that eventually landed at Edwuin Sostenes’ feet who fired it home for their third goal of the half.

Less than a minute later Ceron delivered a ball to Irvin Rodriguez, who put home another long shot with two minutes left in the half. The Panthers took that 4-0 lead into the break to give them a load of confidence and momentum.

Chelsea came out and posed more of a threat in the second half getting a break away very early on, which forced Seth Torman to make a save in a tough one-on-one situation.

Although the Hornets had stepped up their defensive play and kept the ball around midfield, Pelham’s offense still found a way to add one more insurance goal.

Off of a long inbounds pass, Kevin Rodriguez found Jose Jimenez who brought the ball down and fired it into the back of the net to put the Panthers up 5-0. The game got very defensive over the final 20 minutes as neither team really threatened and Pelham hung on for the 5-0 win.