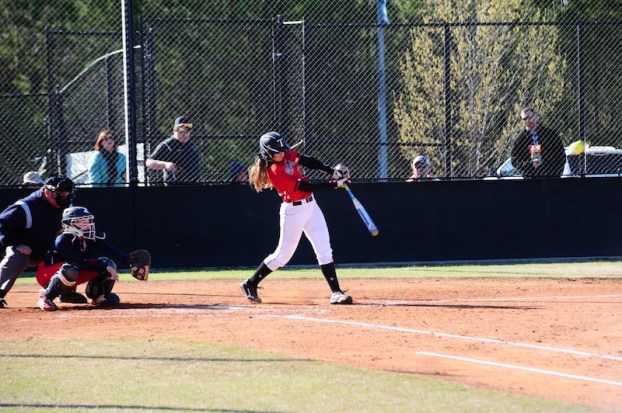 Thompson's bats have come alive during the last three games, hitting for 12-plus hits in all three and scoring a combined 29 runs. (Reporter photo/Alec Etheredge)

The Thompson softball squad is starting to look like the team of old. A team that started 14-4 this season before hitting a slump that featured a record of 2-3-3 over an eight-game span. Last Thursday, the Warriors picked up a dominating 13-2 win over Pelham and have since followed that with back-to-back wins over Oak Mountain and Helena on Monday, March 10 and Tuesday, March 11 to reestablish themselves as strong contenders in Class 7A.

While they used an 11-run first inning against the Panthers, this game started much slower as both teams were held scoreless through the first three innings of play. Thompson ended the scoreless streak very abruptly in the top of the fourth, however. The Warriors put together eight hits in the inning, including four singles, three doubles and a three-run home run from Lauren Haskins to take a 6-0 lead.

Thompson put up two more runs in the top of the sixth to extend their lead to 8-0 before Oak Mountain finally got on the board in the bottom half of the inning thanks to a two-RBI double by Abbi Brown.

With the score 8-3, the Warriors struck back in the top of the seventh putting up two more runs, which was more than enough support as the Eagles could only bring home two in the bottom of the seventh to end the game at 10-5.

Kennedy Foote led the way at the plate going 4-5, but didn’t drive home any runs. Haskins’ deep bomb to left field helped her lead the Warriors with three RBI’s. In all, nine different Thompson players picked up a hit, while six of those nine had multi-hit games. Bailey Whitfield got the start in the circle allowing nine hits and just two earned runs.

A matchup between 7A No. 10 Thompson and 6A No. 7 Helena already had the ingredients to be exciting, but throw in an extra-inning affair and you couldn’t have asked for a more entertaining game.

Warriors were able to use another strong game at the plate to handle the Huskies 6-5 as they went off for 14 more hits, marking their third consecutive game with 12-plus hits, but none was more important than a Foote walk-off double to center field that drove in Haskins for the winning run.

Helena struck first in the top of the first thanks to three walks an and error that drove in a run, but frankly the inning could have been a lot worse for the Warriors had Heaven Rodgers not gotten three consecutive outs after that run crossed the plate.

The Warriors took advantage of their fortune by putting up a three spot in the bottom half of the first thanks to RBI singles from Madison Bubel and Mikayla Touhey.

Helena came right back and answered with three runs of their own in the top of the second thanks to a two-run shot over the center field wall from Tamar Watts, which helped the Huskies storm back in front 4-3. Helena added one more run to their lead in the top of the fourth to take a 5-3 advantage, a lead they carried with them until the bottom of the fifth.

Haskins led the inning off with a single before Foote hit a line drive to right field that she was able to leg out for a triple to bring Haskins across the plate. Bubel followed with an RBI single as the Warriors had erased the two-run deficit to tie the game.

The game remained in that 2-2 tie until Foote’s walk-off in the bottom of the eighth as the Warriors were able to play from behind and win 6-5.

Foote went 2-4 with two RBIs and a walk in the game, while Haskins and Bubel both picked up three hits apiece to lead the Warriors. Bubel also had a game high three RBIs.

Thompson now sits at 19-7-2 on the season with three straight wins under their belt.