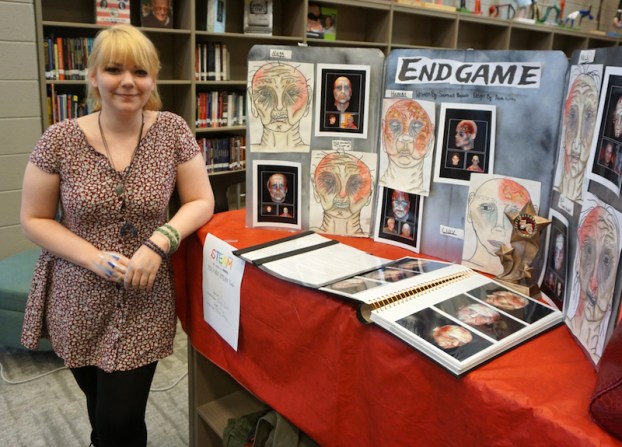 “Makeup has been my passion since about the ninth grade when I asked my theater director, Mr. Casey, about the makeup team and was assigned the job of makeup artist for our first show, ‘Arsenic And Old Lace,’” she said.

Keith says she immediately fell in love with the process and the implicit creativity it requires and has been working the makeup for HHS shows ever since.

“For STEAM, I chose to illustrate ‘Endgame.’ Immediately after reading it I had a clear idea for what I wanted to design,” she said.

“Endgame” is an existentialist piece written by Samuel Beckett that eventually found its way to fit into the theater of the absurd genre and time period. Beckett wrote this one act to be acted out upon a stage set up as a chess board in order to show the trivial undertones of life and to better symbolize his characters.

“The world in which Beckett describes the setting to be is very similar to ours in the 1940s, based off of descriptions of objects and tone,” Keith said. “The difference being that there is no more visible sunlight and they’re residing in a post-apocalyptic radioactive state. In this world all characters are affected by vitamin D deficiencies and have health problems including, but not limited to rickets, arthritis, osteoporosis, bone and muscle atrophy, tooth loss, skin discoloration and general malnutrition.

“The second and more prevalent cause of physiological health problems would be the constant exposure to high levels of radiation,” she explained in her presentation.

This results in burns and blisters on the face similar to sunburn, hair loss, cataracts, blindness, lack of pigment in face, tooth loss, jaundice, cancer and peeling sections of skin.

“I tried to incorporate these elements in all of my designs to better give the audience a view of what I saw in my head as I read this piece,” she said. “Design is all about making what you see into a reality; that’s what I love so much about it. I hope that I can continue the opportunity to do more designs like this and have as much fun doing as I did this year!”