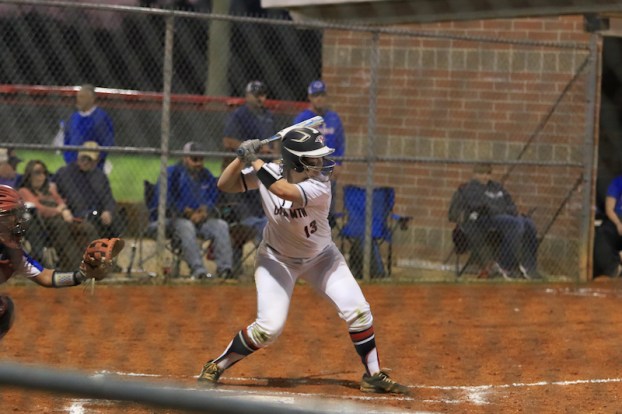 Oak Mountain's O'Neil Roberson took a two-run walk-off shot over the left field wall to lead her team to a 2-0 win over No. 2 Spain Park. (For the Reporter/Dawn Harrison)

NORTH SHELBY – There were no combined runs between Spain Park and Oak Mountain through nine-and-a-half innings of action on Thursday, April 13 until O’Neil Roberson stepped to the plate in the home-half of the 10th with everything on the line for the Eagles.

Coming into the game, Oak Mountain sat with an area record of 4-1, while Spain Park was sitting at 5-0. That one area loss for the Eagles came by way of the Jaguars on March 20 in a tough one-run 2-1 loss at Spain Park.

What it set up for Oak Mountain was a must win situation on Thursday night if they wanted to win the regular season area championship and host the all-important area tournament in May. The Jags on the other hand had the chance to clinch the championship and become the host team with a win that would have guaranteed a perfect finish in area play.

After a groundout started the bottom of the 10th, Jenna Galloway stepped to the plate and singled on a line drive to left field on the first pitch she saw.

This brought Roberson to the plate, who in an 0-1 count, got the pitch she wanted and drove a deep fly ball over the left field wall for a two-run walk-off bomb to pick up a 2-0 win over the No. 2 ranked Jaguars. As she touched each base, the realization became that the Eagles were still alive for an area championship after all.

While there is still work to be done with one more area matchup against Huffman to end the season, a win in that game is almost a formality, which would lead to a coin toss between the two 5-1 teams atop the standings to determine who will host the 2017 Class 7A Area 6 tournament.

While the walk-off shot was at the forefront, hidden as the story of the game was the awe-inspiring pitching performances from both Spain Park’s Annabelle Widra and Oak Mountain’s Clara Fuller.

Widra threw all 9.1 innings that her team was on the field tossing a grand total of 128 pitches. She allowed 10 hits and those two important runs, but struck out an impressive 10 batters during the contest.

While Fuller’s strikeouts didn’t jump off the page with just three, she had the Spain Park hitters confused all not only allowing three hits and one walk in 10 innings of play. She threw 107 pitches and accumulated 20 flyouts and seven groundouts in the game. 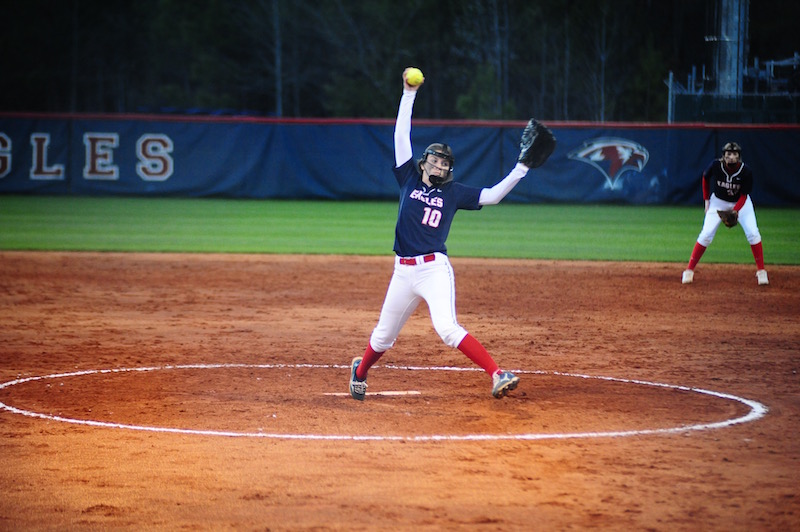 Clara Fuller went all 10 innings in the circle for the Eagles and only allowed an impressive three hits and one walk. (Reporter photo/Alec Etheredge)

Both teams went 1-2-3 in the first 2.5 innings of play before Oak Mountain was able to string together a couple of singles in the bottom of the third.

In the first seven innings of the game, Spain park was only able to reach base on an error, one single and a double as they really never posed a threat.

That trend continued until Maddie Majors led the top of the ninth off with a triple to left field, which gave the Jags a great opportunity. Fuller, however, went back to her dominating ways and got out of the jam without any damage occurring.

In the bottom half of that inning, Oak Mountain loaded the bases with two outs, but Widra was also able to get out of that jam as the two continued throwing jabs.

It was Roberson’s only hit of the game as she went 1-5, but it was the only hit that mattered. Cassady Greenwood and Fuller both picked up two hits at the plate for the Eagles.

Majors, Widra and Harrington were the only SPHS players to pick up a hit.

By GRAHAM BROOKS / Staff Writer BIRMINGHAM–Helena senior Maggie Blanton, and 104 other high school seniors across the state of... read more