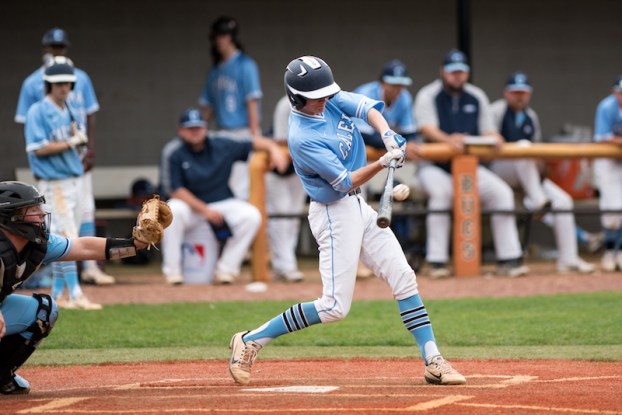 Calera continues to impress this season and has now clinched a spot in the 2017 playoffs with a chance at an area title. (Reporter photo/Keith McCoy)

Last week I went on a bit of a rant regarding the ASWA baseball and softball rankings, which may or may not have been necessary considering they mean absolutely nothing.

That being said, several teams in Shelby County are having historically good seasons, with a couple getting national recognition in Helena’s baseball team and Spain Park’s softball team. The success of these team’s deserves to be recognized and this week that was seen as a season-high eight baseball teams were ranked in their respective classification’s top 10.

Despite being in the lowest classification, the AISA, the Kingwood Christian Lions have been deserving of a spot this entire season and they finally got that recognition this week. After spending the season unranked, the Lions jumped to No. 8 in the AISA top 10 after winning their area championship and clinching a first-round bye in the upcoming AISA state playoffs.

Kingwood one game ahead of Autauga Academy in the area standings after taking one of two with the Generals in their most recent series to finish the season with a 7-2 area record.

Another team that improved their position was the Oak Mountain Eagles, who dropped behind Hoover to No. 4 last week. This week they leap frogged right back over the Bucs to take back the No. 3 ranking after winning three straight games following their 4-0 loss to 6A No. 1 Helena. The Eagles have an overall record of 24-8 this season with area games against Huffman and Spain Park still remaining.

Speaking of the Jags, they jumped back into the rankings taking the No. 10 spot after a week-long hiatus thanks to three wins in a row last week. They followed that with back-to-back losses to Bob Jones, but with an important area series against the Eagles looming, Spain Park can surely help their case in proving they are one of the best 7A teams in the state with at least one win.

Moving down to the 6A ranks, we will find the first county team to take the No. 1 position as the Helena Huskies sit atop the standings. It’s not even a question at this point as to how good the Huskies are now that they’ve finished area play undefeated. Helena is getting a lot of national recognition and for good reason. They are a massive favorite to bring home a state championship, but have to keep their eye on the prize.

After sweeping Chelsea with ease, Helena moved to 28-4 this season giving them the best record among all high school baseball teams across the state.

Chelsea held pretty consistent this week coming in at No. 8 in the 6A standings. The Hornets have now lost four straight games after winning eight straight and 10 of 11, but three of those losses came to the Huskies, which doesn’t hurt them at all. With a couple of meaningless games left on the schedule it would be nice for them to head into the playoffs with two wins and some momentum.

Sliding down to 5A, we’ll find the county’s second No. 1 team in the Briarwood Lions who have done it in very similar fashion to the Huskies. Briarwood is coming off a sweep of Shelby County to finish area play a perfect 6-0 and win the area championship. They have won 16 of their last 18 games and sit at 22-3 on the season.

In the last rankings, Calera took a drop after an average time in the Buccaneer Classic from No. 4 to No. 8, but this week they jumped back up to No. 6 in the poll after going 4-1 in their last five games and clinching a spot in the 2017 postseason. They have a chance to clinch the area championship with a win over Marbury tonight.

Another team that jumped back into the rankings and picked up an area championship was the Vincent Yellow Jackets, who picked up two area wins over Ranburne this past week to bring home the championship and lock up a spot in the playoffs.