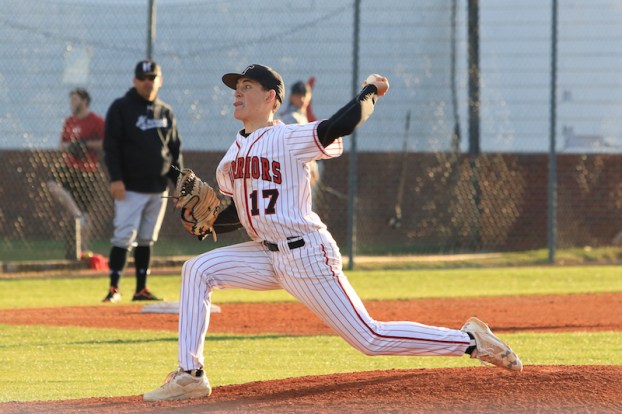 The Thompson pitching staff was one inning away from throwing three complete games as they dominated in the sweep over Tuscaloosa County. (For the Reporter/Dawn Harrison)

Despite their record being less than stellar, the Thompson Warriors baseball squad has shown they have what it takes to compete with some of the best teams in the state after splitting a pair of matchups with No. 4 Hoover the week of April 3.

On Tuesday, April 11, the Warriors found themselves back in area action with Tuscaloosa County before closing out the series on Thursday, April 13. Thompson swept the Wildcats in three games with the first two counting toward area play, which improved their area record to 3-1 and skyrocketed them into a tie for first place with Vestavia Hills.

The trend in games one and two was the strong pitching performances from the Warriors. In game one, it was a two-hit complete game shutout for Drew Williams on the mound that got things done for Thompson.

While their bats weren’t alive, only snagging five hits and two late hits, Williams went the distance allowing just two hits, one walk and no runs, while striking out three.

The Warriors went scoreless during the first five innings, but finally broke into the scoring column in the bottom of the sixth. It started with a JC Parker and Braden Ashmead single, which was followed by a two-run double from Chris Lewis with two outs in the inning to put the games only runs on the board. Lewis went 1-3 with two RBIs to pace Thompson at the plate.

Yet another strong and almost identical pitching performance took place in game two as JC Parker took to the mound and pitched a two-hit complete game shutout of his own. He also struck out six batters while only tossing 72 pitches during his seven-inning outing.

While the pitching continued to be outstanding, the offense decided to catch up as well. The Warriors went off for two runs in the third, second and sixth innings, as well as one more insurance run in the top of the seventh leading to the 7-0 win.

Lewis went 1-3 at the plate again, but this time added a triple to his stat line. Myles Brown and Bryson Miller led the Warriors, each picking up two hits. Miller went 2-2 with two RBIs and one walk, while Brown went 2-4 with two RBIs to help Thompson move into a tie for first in the area.

While game three had no bearing on the area standings, it was still a dominating performance from Thompson as they picked up a 10-3 win to complete a three-game sweep of the Wildcats.

It was another combination of strong pitching and offense that led the Warriors as JD Kyttle went six innings allowing just one hit and no runs while striking out an impressive 10 batters. On the offensive side, Thompson picked up 13 hits and 10 runs to run away with things.

Josh Hunter had a monster game at the plate going 3-4 with one RBI and two runs scored. Jake Simonetti and Colby McClain also had multi-hit games, including three RBIs from Simonetti.

The two area wins set up a massive matchup between Vestavia and Thompson on April 18 and 20 to determine which team will advance out of the area and into the playoffs.

Several scenarios are still possible, but if either team sweeps the two area games, then they will win the area championship and advance to the playoffs.

If the two teams split the series, that sets up a strong possibility of a three-way tie between them and Hoover with only two teams being able to make it out of the area and into the playoffs, which will create heartbreak for one of those great teams.

The Bucs, who sit at 2-2 in area play, have two area games left with Tuscaloosa County, which they should easily be able to handle, but should they falter it paves the way for the Rebels and Warriors. Either way Thompson controls their own destiny if they can put together two wins in those final two area games.

By ALEC ETHEREDGE | Sports Editor  The Thompson softball squad is starting to look like the team of old. A... read more