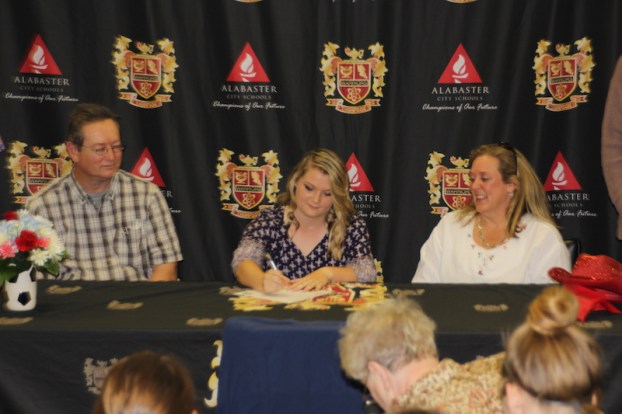 Angelica Justice signs her letter of intent to attend Northwestern Mississippi Community College with her mother and father on both sides of her. (Contributed)

ALABASTER –  Since the spring of 2015, Angelica Justice has been seen pretty much all over the Thompson soccer field as a staple member of the Warriors’ girls soccer team, but now the Thompson bench will look a little different as Justice graduates this spring and moves on to bigger things.

While Justice is hanging up her red and black jersey, it’s not the last time she will sport a soccer uniform as she reached the decision to continue her soccer and academic career at Northwestern Mississippi Community College. She became the third Thompson senior on this year’s 2017 squad to commit to play soccer at the next level.

“I just want to thank all of my coaches for the amazing journey up to this point in my career,” Justice said. “I also want to give thanks to my brother who is not here today because he is in Fort Benning, but he is the one who inspired me to play soccer in the first place.”

As a sophomore in 2015, Justice made the team at just the right time as the Warriors had just lost two starting defenders and a midfielder off of their 2014 squad. In comes Justice who can cover any position on the entire field, and that she did.

She came in right away and made an impact, playing every position you can possibly play in her three-year career, including goalkeeper where she made a PK save during a stint that involved injuries to Thompson’s top two goalies.

“I’m glad we get to come together today and celebrate her because this has been a long time coming for her,” Warriors head coach Nathan Button said. “She’s been struggling with having to make this decision and that wait of where am I going to go has finally been lifted.”

In her time on the Thompson soccer team, Justice won two Island Cups, a metro tournament, helped her team constantly remain in the top 10 and to an overall record of 41-18-5.

“She’s dominant as a player and isn’t afraid of anything,” Button said. “Most importantly she is always willing to give herself for her teammates. She will do anything for her friends and her teammates at any time.”

Button got the pleasure of not only coaching her, but also teaching her in the classroom and said he couldn’t be happier to see someone’s hard work and determination pay off.

“She’s a relentless player and when on the field she gives everything she has,” Button said. “She’s selfless in supporting her teammates and that’s one of the reasons we have been able to have the success we have had because everyone comes together regardless of what is being asked of them.”

By ALEC ETHEREDGE | Sports Editor Despite their record being less than stellar, the Thompson Warriors baseball squad has shown... read more